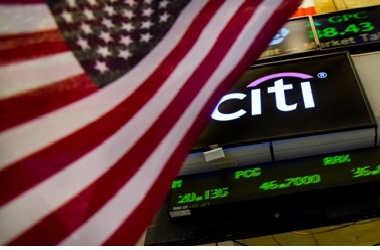 The banking behemoth is now second only to U.S. Bancorp in keeping costs down. But it’s nowhere near its smaller rival’s market-leading return on equity. Offloading its remaining toxic assets and using more of its tax breaks will help. But that’s a slow process.

A Citigroup logo is pictured from the floor of the New York Stock Exchange, July 9 2014. REUTERS/Brendan McDermid

Citigroup on July 16 reported net income of $4.85 billion for the second quarter. It was the bank’s most profitable three-month period in eight years. At $1.51 per share, earnings exceeded the consensus estimate of sell-side analysts of $1.34 per share, according to Thomson Reuters.

The bank’s credit loss provisions fell by $267 million in the period compared to Q1, which along with a smaller tax bill helped drive the 2 percent increase in net income, despite revenue falling slightly and expenses rising a tad. Its efficiency ratio, the measure of revenue divided by expenses, was 56 percent, compared to 55 percent in the first three months of the year. The efficiency ratio in last year’s second quarter was 80 percent.