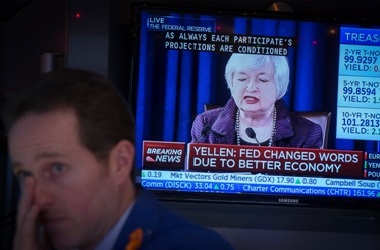 When the blind lead the blind, there’s little confidence in the direction of travel. Something of the sort is going on in global markets. Central bankers are giving out unclear directions and investors are wondering just where they should go.

Take asset managers’ response to bad economic news. In the past, they responded to anything that pointed to economic weakness as a buying signal for riskier assets. Investors reasoned that the news meant loose or even looser monetary policy, and that this easy money did asset prices more good than a weak economy did them harm. Conversely, signs of improving activity were mostly a trigger for stock market declines.

But investors are increasingly capricious. The U.S. S&P 500 index did not rise on Sept. 17, when the U.S. Federal Reserve left policy interest rates unchanged. It fell that day and for six of the next seven trading sessions. An unexpectedly weak U.S. jobs report on Oct. 2 led first to a sharp fall and then to an even greater rise. The S&P closed up 1.4 percent on the day. Since then, the market has risen on generally weak economic news, aside from a dip when two Fed board members suggested rates should not rise in 2015.

One reason for rapidly shifting sentiment is that the markets have lost confidence in the ability of Janet Yellen, the Fed chair, to give them clear directions. The central bank’s sensitivity to market gyrations – one of the concerns Yellen mentioned in her post-decision press conference – leads investors to fear that she is following rather than leading. The dissent on the board only reinforces their doubts.

But even a unified Fed might not bring much confidence. Investors are losing faith in the potency of monetary policy to overcome slowing Chinese economic activity or generate much inflation. Little wonder that market inflation expectations have fallen in much of the world, even though there is growing speculation that the European Central Bank may be forced to ease policy further.

The market is likely to continue meandering. Vacillating and impotent central bankers make for erratic investors.

Federal Reserve Chair Janet Yellen is seen on a television screen as a trader works on the floor of the New York Stock Exchange, December 17 2014. REUTERS/Brendan McDermid

Federal Reserve Governor Daniel Tarullo on Oct. 13 said the U.S. central bank should not hike interest rates this year. “Given where I think the economy would go, I wouldn’t expect it would be appropriate to raise rates,” Tarullo said when asked in an interview with broadcaster CNBC if rates should rise this year. The previous day Fed Governor Lael Brainard said the Fed should hold off on rate hikes until it is clear that trouble in China and other international risks will not push the U.S. recovery off course.

The S&P 500 fell 0.26 percent on Sept. 17, the day the U.S. Federal Reserve left its policy rates unchanged. It declined on six out of the next seven trading days.