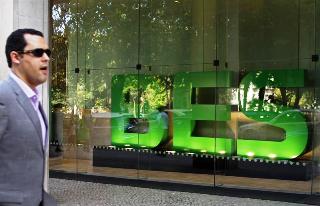 Banco Espirito Santo’s shares have tanked 70 pct since a rights issue barely two months ago. UBS and Morgan Stanley, which led the 1 bln euro equity raise, hoisted red flags. The banks could have heeded their own findings and refused the job. Customers have a right to be angry.

A man walks in front of a window of the headquarters of Portuguese bank Banco Espirito Santo in Lisbon. The sale of a €2.6bn portfolio of project and corporate loans by Banco Espirito Santo sent shockwaves around the loan market last week, as the bank tried to stem heavy lending losses arising from persistently high funding costs.

Banco Espirito Santo on July 30 reported a loss of 3.6 billion euros and said it would need to raise fresh capital. The Bank of Portugal said senior BES officials had been suspended over suspected “harmful management” that may have contributed to the bank’s losses.

An offering circular for BES’s earlier rights issue, published on May 20, cited “reputational risks for the BES Group associated with a potential deterioration or perceived deterioration of the financial position of Espírito Santo International, S.A. or its subsidiaries.”

The circular also states that the financial condition of Espírito Santo International could have an adverse impact on the BES Group’s reputation and the market price of BES shares.

Another risk factor cited was that a personal guarantee provided by the Angolan state in favour of BES’s Angolan operations, regarding transactions with Angolan companies, might not be renewed.

Fees payable to underwriters were a maximum of 31 million euros, or 3 percent of the total deal.

UBS and Morgan Stanley, who acted as joint global coordinators and bookrunners, declined to comment.