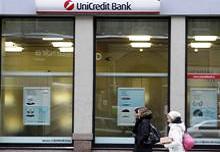 Since missing the boat on capital raising earlier this year, sovereign concerns have smashed the Italian bank’s share price. Underwriters may only back a rights issue if the euro zone crisis eases. The best option might be to find a deep-pocketed Middle Eastern investor.

A woman uses an UniCredit ATM in downtown Milan.

UniCredit has denied reports that it is planning to sell its Polish and Turkish operations. A spokesperson for the Italian bank told Reuters on Sept 15 that the reports were “completely groundless”.

UniCredit shares were trading at 0.73 euros on Sept 15, 52 percent below their position on July 1, and around 0.4 times its likely annual tangible book value in 2011. Intesa SanPaolo shares trade at 0.99 euros, 45 percent below where they were on July 1.

UniCredit could raise its core capital via a rights issue, risk-weighted asset reduction and asset sales, chief executive Federico Ghizzoni told the Financlal Times on Sept 12. He added that the bank was still working on a strategic plan for the business.