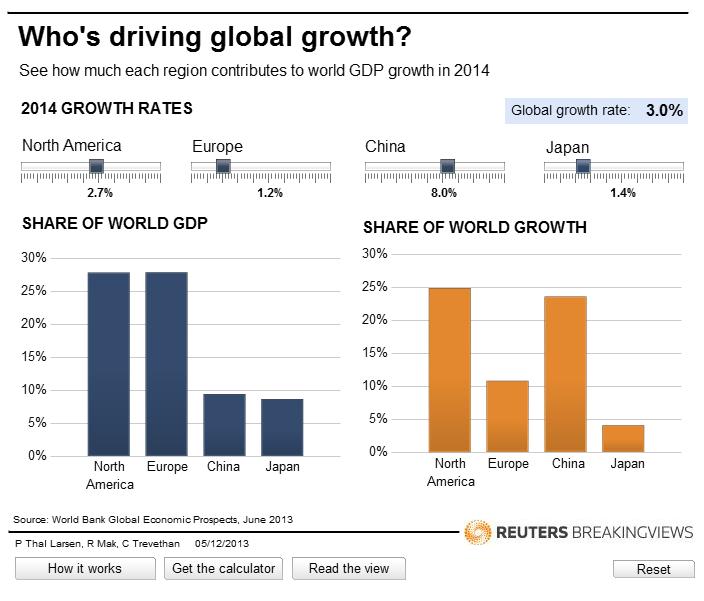 The United States and China will determine the pace of global growth in 2014. Though America accounts for a quarter of the world economy and China less than a tenth, the two countries will generate roughly half the expansion in overall GDP next year. With Europe in the doldrums, Japan still recovering and emerging markets subdued, the planet heavily depends on its twin engines.

The global economy is expected to expand by about 3 percent next year, according to World Bank forecasts. But growth rates vary widely across the globe, and so do individual countries’ contributions. North America’s recovery means it will deliver almost a 25 percent of the total growth in world GDP, according to a Breakingviews calculator. Though China’s economy is much smaller, if it achieves a forecast growth rate of close to 8 percent it will make an almost equal contribution.

The world’s dependence on these two dynamos is partly a reflection of subdued growth elsewhere. Europe’s share of overall output is the same as North America’s, but the continent is expected to expand by little more than 1 percent next year. Japan’s economy, meanwhile, is only slightly smaller than China’s. However, even with the help of an Abenomics revival it is expected to grow by just 1.4 percent, which means its share of overall growth will be just 4 percent.

The calculator also shows how sensitive forecasts are to changes in growth rates. Any acceleration or slowdown in the United States will be felt by the rest of the world – not just through trade and investment but through changes to the Federal Reserve’s money-printing policy. If China’s economy grew by a disappointing 6 percent, meanwhile, it would shave less than 20 basis points off world GDP growth. A relatively small acceleration in Europe’s rate of expansion, to 1.8 percent, would boost overall growth by the same amount.

The fortunes of emerging markets such as India and Brazil will doubtless attract a great deal of interest, especially if the Fed begins to turn off the tap of cheap dollars. But when it comes to setting the overall direction of the world economy, these countries hardly register. On current forecasts, global growth is very much a two-horse race.

The world economy is expected to expand by 3.03 percent in 2014, according to the World Bank’s June 2013 forecasts and calculations by Reuters Breakingviews.

The calculations are based on 2012 World Bank GDP figures, expressed in constant currency terms based on 2005 dollars.

The world economy is expected to expand by 3.03 percent in 2014, according to the World Bank’s June 2013 forecasts and calculations by Reuters Breakingviews.

The calculations are based on 2012 World Bank GDP figures, expressed in constant currency terms based on 2005 dollars.