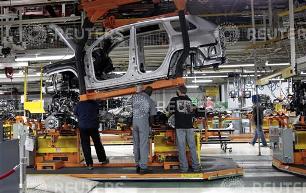 U.S. car sales are putting the brakes on the economy’s detractors. Americans are buying more vehicles thanks in part to pent-up demand and cheap loans. But the housing recovery helps, too. That and other economic data suggest consumers are looking beyond slimmer paychecks. Federal spending cuts allowing, that means the U.S. engine may be about to purr.

At 1.45 million units, industry sales in March were 3.4 percent higher than the same month last year. Ford and Toyota posted their best month since 2007. While lower than in February on a seasonally adjusted annual basis, according to Goldman Sachs, sales maintained the pace that prevailed before Congress allowed a 2010 tax break to expire, pushing the payroll tax rate back up to 6.2 percent.

Several factors outweigh that. The average car on U.S. roads is 11 years old – 13 for pickups. That makes them expensive to maintain, increasing the desire or need to replace these old clunkers. Financing is also cheap – even for borrowers with less than stellar credit.

But the decisive upturn in housing helps, too. Light truck sales, which are strongly correlated with housing, rose by double digits last month, with Ford reporting a 16.3 percent rise in pickup trucks used by building contractors.

This is exactly what the Fed is after. A healthier housing market has a direct impact on creating more demand and jobs, unlike higher stock valuations.

The pickup in pickups and other vehicles is not the only sign of an improving economy. It builds on data released last week that showed consumer spending jumped by 0.7 percent in February versus the prior month. That sent economists scrambling to pencil in first-quarter GDP above 3 percent.

If economists are right that the payroll tax shaved 0.6 percent off growth, then without it GDP could have been running as hot as 4 percent in the first three months of the year. That will probably slow down in the second quarter when the government’s austerity measures take their biggest bite. But after that there’s no sign of fiscal belt-tightening for some time.

With interest rates extraordinarily low and consumers increasingly confident the economy finally may have a full tank to power itself forward.

U.S. auto sales were 1.45 million in March, a 3.4 percent increase from 12 months ago. Sport-utility vehicles and light trucks posted double-digit increases, according to data released by major automakers on April 2.
U.S. personal consumption rose 0.7 percent in February over the prior month as income rose by 1.1 percent, according to U.S. Department of Commerce data released on March 29.

Chrysler Group assembly workers lower the frame onto the chassis for Chrysler Jeeps, Grand Cherokees and Dodge Durangos at the Chrysler Jefferson North auto plant in Detroit, Michigan April 28, 2011. Chrysler has launched a US$3.5bn term loan that will refinance the company’s debt and repay government loans stemming from its 2009 bail-out.

U.S. auto sales were 1.45 million in March, a 3.4 percent increase from 12 months ago. Sport-utility vehicles and light trucks posted double-digit increases, according to data released by major automakers on April 2.
U.S. personal consumption rose 0.7 percent in February over the prior month as income rose by 1.1 percent, according to U.S. Department of Commerce data released on March 29.