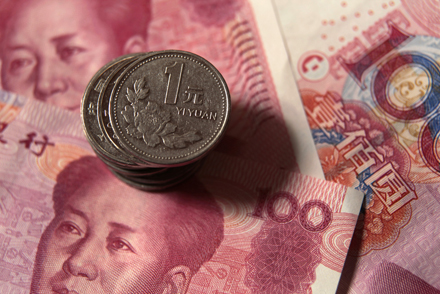 China has kept its currency steady while those around it have plunged. But try telling that to U.S. critics who still argue the yuan isn’t rising fast enough. Senators may vote this week on a currency bill that could lead to duties being placed on Chinese exports as punishment for a cheap currency. Weak U.S. job data makes that more likely, but for the United States to lash out now could be a mistake.

New accusations of currency manipulation from the United States come just as China least deserves them. Appreciation of the yuan on the trade-weighted basis in September was the fastest in at least a year. The central bank has been repeatedly fixing the midpoint around which the yuan trades each day at record highs -even as traders subsequently push the yuan’s value down by the maximum 0.5 percent.

Without China’s strict capital controls, the yuan would probably be worth even less, not more. Other Asian currencies have fallen as much as 10 percent against the dollar in the past month as investors pull out money. The offshore-traded yuan in Hong Kong has fallen as much as 3 percent from Sept. 1.

This probably won’t matter to U.S. lawmakers, who are keen on finding a scapegoat for U.S. job woes. Figures due on Oct. 7 are likely to show the U.S. unemployment rate stuck at 9.1 percent in October. If the bill passes the Senate, which looks likely, it then goes to the House of Representatives, where there are already more supporters than last year. U.S. President Obama, whose re-election chances in 2012 are clouded by high unemployment, may be reluctant to veto it if push comes to shove.

This is worrying. Hitting out at China when it is already fighting a weakening currency may just result in retaliation. Trade tariffs on U.S.-made goods, for example, would hurt the United States because China’s imports from the United States are now growing at 17 percent a year, faster than the exports that run in the other direction. A rash trade action at such a moment runs a big risk of backfiring.

The Senate was set to begin action on Oct. 3 on a bill that would pressure China to revalue its currency, and clear the way for duties on China’s exports if it refused.
If the bill were to pass the Democrat-controlled Senate after a vote that may take place in a week or longer, it would then go to the House of Representatives. In 2010 a similar measure was passed in the House, but never reached a vote in the Senate.
China’s official news agency Xinhua said on Oct. 2 that U.S. lawmakers’ efforts to pressure Beijing over its currency policy was “expedient and shallow”, and argued that the bill reflected an old habit of deflecting blame on China.
The yuan hit its lower daily trading limit on Sept. 29 and 30, after being set at a record high by the People’s Bank of China. Each day the yuan can fall or rise up to 0.5 percent versus the U.S. dollar, based on a midpoint set by the central bank each morning.