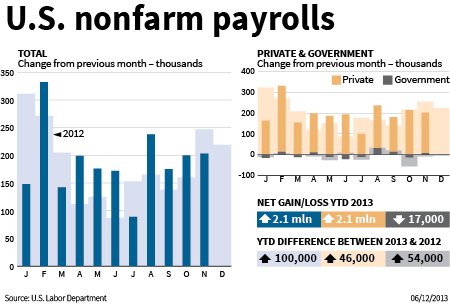 America added 203,000 jobs last month and the unemployment rate dropped to 7 pct, adding to strong data like the third-quarter GDP growth rate of 3.6 pct. Reduced labor participation and sluggish wages are headwinds to a full-on recovery. But even a little normality is a relief.

The U.S. economy added 203,000 jobs in November, the Bureau of Labor Statistics said on Dec. 6, and the unemployment rate fell by 0.3 percentage point to 7 percent. Previous months’ data were revised upward by 8,000 jobs.

The reported labor force participation rate rose slightly to 63 percent, but this was still the lowest reading since 1978 other than October’s 62.8 percent, which the BLS said was distorted by the government shutdown in the first half of the month.