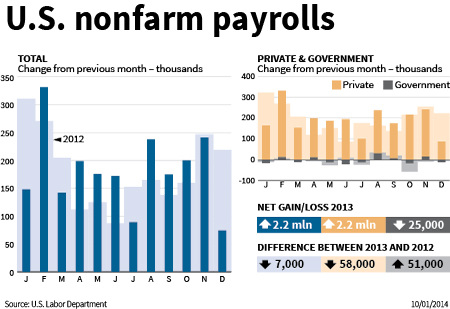 December job creation was weak, but an average of 182,000 new jobs a month in 2013 equates to further steady recovery. The fall in the jobless rate to 6.7 pct, however, is too flattering. Participation in the workforce is still sliding, and that will be a drag on growth.

The U.S. economy added 74,000 jobs in December, according to the Bureau of Labor Statistics on Jan. 10 – considerably fewer than the roughly 200,000 expected by economists. The unemployment rate, calculated using a different survey, fell by 0.3 percentage point, more than expected, to 6.7 percent.

The labor force participation rate fell 0.2 percentage point in December to 62.8 percent, equaling the lowest level since 1978. At the end of December 2012, it stood at 63.6 percent.