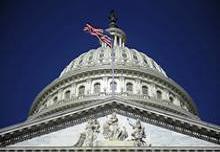 Warnings of economic catastrophe on Jan. 1, 2013 because of government dithering are exaggerated. The two parties aren’t that far apart on some big tax issues and tougher decisions can wait a bit for post-election settling. This modest austerity will ding not doom the recovery.

If no action is taken in Washington by Jan. 1, temporary income tax rates established during the George W. Bush administration will expire, pushing up rates between three and five percentage points. Capital gains and estate taxes will also rise. In addition, the Alternative Minimum Tax will hit millions of middle-class Americans. Finally, Social Security payroll taxes will rise by two percentage points, after being cut to stimulate the economy for the past few years.

As 2013 begins, government spending cuts are also set to automatically trigger. When lawmakers agreed to raise the U.S. debt ceiling last summer, they agreed to cut the deficit. Since the two parties could not agree on a broader $1.5 trillion plan, $1.2 trillion in automatic cuts were imposed, coming from defense and discretionary spending over 10 years beginning in 2013. Separately, federal funding for extended unemployment benefits will also expire.

Congress also will have to revisit the U.S. debt limit, which is projected to be reached around the end of 2012. House of Representatives Speaker John Boehner, a Republican, has already stated that he will only agree to raise the cap with proportional budget cuts.

These combined elements have come to be known as a “fiscal cliff” that Federal Reserve Chairman Ben Bernanke warned lawmakers about in February. Election-year politics could delay action until after November, which would leave the task to a lame-duck session of Congress.