Bump in the road 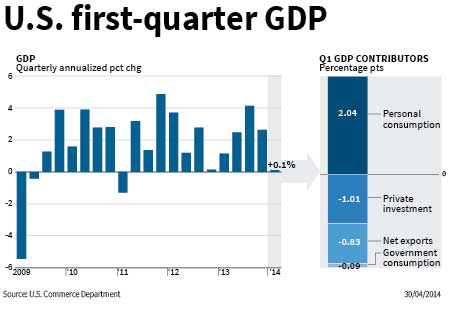 First-quarter growth of only 0.1 pct looks feeble, and it wasn’t just bad weather. Yet a dip was due after a strongish Q4 and full-year growth was 2.3 pct. Despite healthy consumer spending, weak investment and other data, continuing tepid recovery may be the real message.

or
Request a Free Trial
or
Boris Johnson’s fate is an economic sideshow
Sign in to your Breakingviews account
If you need assistance please email breakingviews.clientsupport@thomsonreuters.com

The U.S. economy expanded at a 0.1 percent annual rate in the first quarter, much lower than the 1.2 percent analysts expected. REUTERS/Stephen Culp