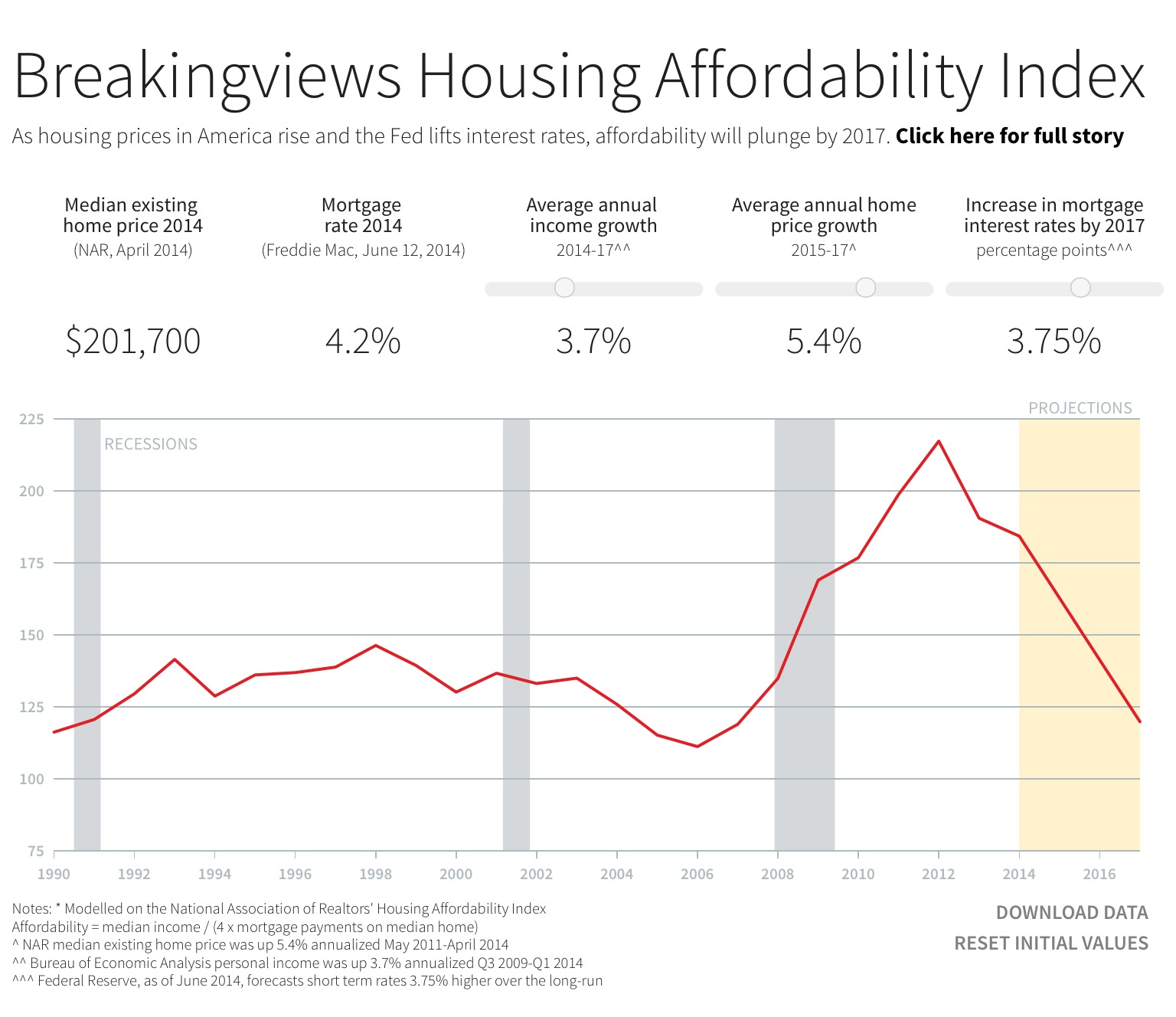 U.S. homes may soon be as unaffordable as they have been in decades. With the Federal Reserve set to raise interest rates, house prices rising and incomes not keeping pace, the dream of home ownership – cheaper after the 2008 downturn – is receding again for many. A new Breakingviews calculator shows that by 2017 homebuyers may have to stretch once again.

After existing home sales hit 7 million in 2005 at the peak of the U.S. housing boom, they plummeted to 4 million in 2008, according to National Association of Realtors (NAR) data. Prolonged weak sales and soaring foreclosures sent prices spiraling downward.

With the Fed set to raise rates, house prices rising and incomes not keeping pace, the dream of home ownership is receding again for many Americans. By 2017 homebuyers may have to stretch the most in decades.

The median home price bottomed in 2012 at under $160,000, just as typical incomes finally began growing at a faster clip, according to government data. Meanwhile, interest rates hit a low that year as well. The result was unusually high home affordability, according to Breakingviews’ index which – like the NAR measure on which it is modeled – reflects the ratio of typical income to mortgage payments on a median home plus a cushion. The index, which had mostly hovered between 120 and 140 since 1990, started rising in 2008 and spiked above 200 in 2012.

The positive affordability trends have, however, begun reversing. Home prices are up 30 percent since 2012, with the latest median reading above $200,000. Income growth has been modest. Mortgage rates for a 30-year term, at 4.2 percent last week according to Freddie Mac, are closely related to 10-year bond yields and have already begun ticking up even before the Fed starts raising short-term rates.

The Fed’s latest estimates, released on Wednesday, show the mid-range projection is for rates rising from essentially zero to 1 percent in 2015 and 3.75 percent in the longer run. If that happens by 2017 and longer-term rates rise in lockstep, that would take mortgage interest rates to around 8 percent, where they stood in 2000.

Along with subdued income growth and rising home prices, that would make real estate purchases much less manageable in three years’ time. The Breakingviews Affordability Index could fall below 120. Since 1990, it has only been lower than that in 2005 and 2006 when home values were in bubble territory. This time, higher rates and subpar income growth will be the culprits.

With the Fed set to raise rates, house prices rising and incomes not keeping pace, the dream of home ownership is receding again for many Americans. By 2017 homebuyers may have to stretch the most in decades.

U.S. Federal Reserve economists released their latest economic projections on June 18. They showed the consensus seeing the federal funds rate rising to 1.125 percent in 2015. In 2016, the estimates range from about 1 percent to 4 percent, with most seeing rates around 3.75 percent over the longer run.