Drop in the ocean 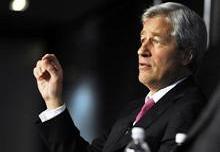 The bank looks set to sell its first mortgage bond without government backing in years. That hints at a belief in such products among both lenders and investors. But until mortgage finance rules are clarified and Frannie’s funding advantage is withdrawn, these deals will be rare.

JPMorgan is marketing its first mortgage-backed security deal without government backing since the financial crisis, a source familiar with the transaction said. If successful, the bank would become the third firm to structure a so-called private-label securitization backed by home loans since the market seized up in 2008. Those other deals, issued by Redwood Trust and Credit Suisse, contained so-called jumbo loans, which are too large to be either bought or guaranteed by home loan agencies Fannie Mae and Freddie Mac.