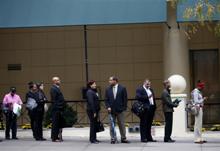 The average of 202,000 new positions a month in 2013 is the best first half since 2005. But the jobless rate is stuck as more Americans gradually look for work. While the Fed has to start reversing its easy policy sometime, employment is far from strong enough to force its hand.

The U.S. economy created 195,000 new jobs in June, the Bureau of Labor Statistics said on July 5, higher than expected by a Reuters poll of economists. New positions averaged 202,000 per month in the first six months of 2013.
The unemployment rate held steady at 7.6 percent. The Federal Reserve expects the unemployment rate to fall to between 7.2 percent and 7.3 percent by the fourth quarter. The U.S. central bank has said it will keep interest rates exceptionally low at least as long as unemployment remains above 6.5 percent.
Long-term interest rates began to jump after Fed Chairman Ben Bernanke indicated at a news conference on June 19 that the central bank would need to begin considering ending or reducing its bond buying programs if the economy continues to improve.
After the positive employment report, 10-year Treasury yields rose further, to 2.68 percent, about 0.5 percentage point higher than before Bernanke’s statements last month. Gold prices were down about $37 or 3 percent on the day by 11 a.m. EDT at $1,215.