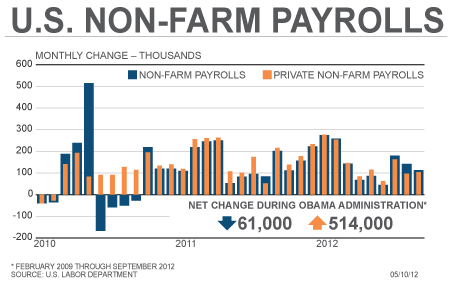 The unemployment rate dropped to 7.8 pct in September, a headline that helped the president’s odds of re-election regain half the ground lost in this week’s debate. But the reality is more of the same – a steady but uninspiring recovery. Jobs will be on the agenda for years.

U.S. nonfarm employment increased by 114,000 on a seasonally adjusted basis in September, according to an Oct. 5 report from the Bureau of Labor Statistics, and the unemployment rate fell by 0.3 percentage point to 7.8 percent. July and August job creation figures were revised up by a total of 86,000 jobs, with government employment being revised up by 91,000.

In September, credit intermediation services gained 3,900 jobs on a seasonally adjusted basis, real estate, rental and leasing services added 8,300 jobs and residential construction gained 1,100 jobs, for a total of 13,300 jobs. In the last twelve months, employment in these three sectors has increased by a total of 84,500 jobs.

On the Intrade website, the odds of President Barack Obama being re-elected rose above 70 percent on the morning of Oct. 5, up from about 65 percent before the BLS report was released. On Oct. 2, the day before the first presidential debate, the closing probability of Obama’s re-election was about 75 percent.