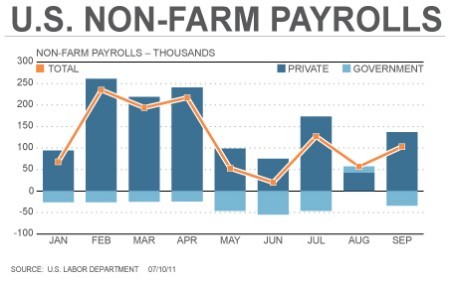 The six-figure increase in employment in September beat expectations but wasn’t enough to cut long-term unemployment, which increased. Still, alongside positive manufacturing data, it suggests the outlook is for slow, patchy growth rather than a relapse into recession.

U.S. nonfarm payroll employment increased by 103,000 on a seasonally adjusted basis in September, the Bureau of Labor Statistics reported on Oct. 7. The U.S. unemployment rate was unchanged at 9.1 percent. Job figures for July and August were revised upward.

The U.S. Institute for Supply Management on Oct. 3 reported its manufacturing index for September at 51.6, up from 50.6 in August, while the services index reported on Oct. 5 stood at 53, a marginal decline from 53.3 in August.