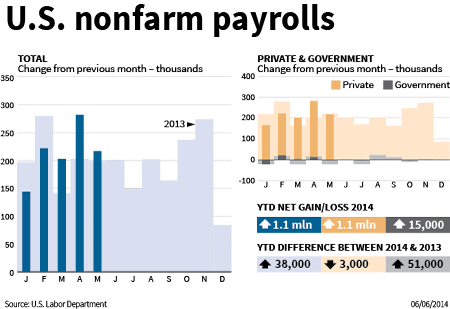 All 8.7 mln jobs lost in the Great Recession have finally been replaced. But America needs about the same number again just to allow for population growth since the early 2008 peak. There are shifts from manufacturing to services but overall it’s simply a long, sluggish recovery.

The U.S. economy added 217,000 nonfarm jobs in May, according to the Bureau of Labor Statistics’ establishment survey on June 6. The household survey showed the unemployment rate flat at 6.3 percent.