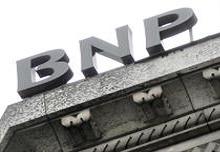 The French bank faces a $3 bln penalty for allegedly violating U.S. sanctions, while its Swiss peer could be fined $2 bln for claims it helped Americans evade tax. CS would wind up with a lower capital ratio. But BNP’s expansionist strategy would be more extensively derailed.

A part of the logo of the BNP Paribas bank is seen on the rooftop of their Paris headquarters April 26 2012. REUTERS/Mal Langsdon

BNP Paribas may pay more than $3 billion to settle charges of violating U.S. sanctions on Iran, Sudan and other countries, Reuters reported on May 13, citing sources familiar with the matter. BNP declined to comment.

Credit Suisse’s final settlement with U.S. authorities over its alleged role in abetting tax evasion could top $2 billion, Reuters reported on May 12, citing sources close to the matter. Credit Suisse declined to comment.