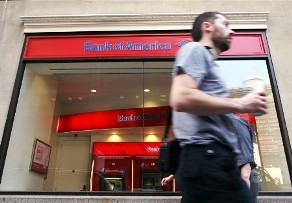 The latest U.S. regulatory assault for mis-selling mortgage securities has dragged down bank stocks. But damages previously sought from UBS, and the performance of the underlying loans, suggest the impact of this particular banking nasty is now more than priced in.

People walk past a branch of Bank of America in New York's financial district April 28, 2009. Bank of America, with its shares under pressure because of its problems with mortgage losses, was the worst hit this week as the cost of protecting its debt against potential default spiked. Five-year CDS traded at around 332bp offered on Thursday afternoon, 32bp wider on the day and 142bp wider from its levels on August 4.

The U.S. Federal Housing Finance Agency (FHFA) on Sept 2 sued 17 financial institutions which, it alleges, mis-sold $196 billion worth of securities to Fannie Mae and Freddie Mac.

The FHFA was established amidst the financial crisis as “conservator” for the two entities, which invest in and guarantee American mortgages worth trillions of dollars. The pair were bailed out by the U.S. government, which has spent $170 billion in an attempt to keep the pair solvent after they lost billions as American house prices collapsed.

The FHFA sued UBS over alleged mis-selling of $4.5 billion of mortgage bonds in July. UBS revealed in its second quarter financial report in July that it faces demands from a counterparty - believed to be the FHFA - amounting to $900m, or 20 percent of the par value of the affected loans.

The FHFA’s latest suits were filed shortly before a three-year deadline for filing lawsuits over the bonds runs out.