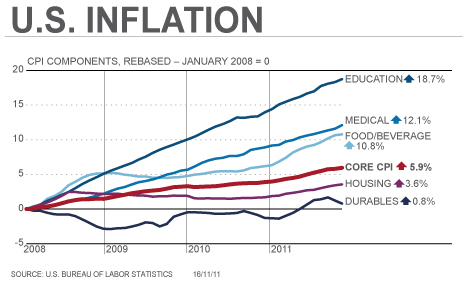 Inflation ebbed 0.1 pct in October after an ominous run-up earlier this year. That will bolster Fed doves like Chicago’s Evans who argue the country’s central bank should fire another burst of unconventional easing. But that is risky and is unlikely to pack much of a punch.

Economists had expected the index of total prices would be flat last month after rising 0.3 percent in September.

In the 12 months through October, consumer prices rose 3.5 percent after rising 3.9 percent in the full year through September.