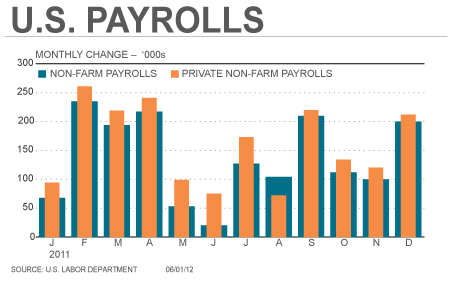 The U.S. recovery is no longer jobless – only homeless. Despite the 200,000 jobs added last month and another drop in unemployment, job creation is still slower than in recent recoveries. That’s partly because the weak housing market means few new construction jobs. Still, President Barack Obama can breathe easier.

Job gains were broadly spread, according to Friday’s report for December, with all major sectors except the government adding jobs and the unemployment rate declining to 8.5 percent, albeit partly due to another 50,000 people leaving the workforce. At this level, job creation is sufficient to absorb U.S. population growth and the headline unemployment rate is on track to decline further, potentially boosting Obama’s re-election chances in November.

Even so, the 1.6 million overall figure for jobs added in 2011 – combining 1.9 million new jobs in the private sector and cuts in government – lags even the relatively feeble recovery of the early 2000s. In 2004, for instance, over 2 million jobs were created. Approaching 3 million were added in 1993, and even more than that in 1983.

The continuing deep slump in the housing market is partly to blame. The construction sector added only 47,000 jobs last year, compared with close to 300,000 in both 2004 and 1993. More than 2 million construction jobs have evaporated since 2007, and the sector’s job count is back to its level in 1996, when the population was smaller.

Today’s modest but steady job growth with construction largely missing out resembles the post-recession pattern of 1961 to 1963, when total job gains averaged 1.2 million annually, only 73,000 of them in construction. That sluggish recovery was decried at the time and helped trigger President John F. Kennedy’s tax cut, finally enacted under Lyndon Johnson in February 1964. After that, recovery quickened into one of the last century’s strongest periods of growth.

The tax cut idea might not appeal much to Obama – and, to be fair, Kennedy was starting with a top marginal income tax rate of 91 percent. That aside, the current president might fancy the comparison with his iconic predecessor and with late 1960s growth just as much as he appreciates monthly job reports like this one.