Trick of the trade 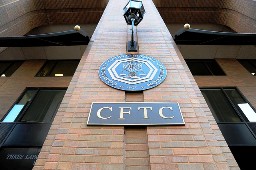 Wall Street firms are suing the CFTC for bypassing standard practice when it issued tough guidance last month on overseas buying and selling of derivatives. U.S. dealers may suffer as a result. Absent the usual analyses and consultation, it’s hard for the agency to make its case.

The Commodity Futures Trading Commission building is pictured in Washington, DC. In its latest attempt to put a leash on OTC derivatives practices, the CFTC has proposed business conduct standards for swap dealers and major swap participants.

Three financial industry trade groups on Dec. 4 filed a lawsuit against the U.S. Commodity Futures Trading Commission, accusing the regulator of failing to follow protocol – such as requesting industry comment and conducting cost-benefit analyses – in November when it drafted a new directive to govern cross-border swap transactions.

The guidance, which follows broader rules for global derivatives trades finalized in July, requires that swaps created through U.S. facilities fall under CFTC jurisdiction even if between two non-U.S. counterparties. The lobbying groups say the agency did not consult the European Commission before drafting the rule. It further asserts that it could lead to problems like transactions being forced to be cleared in two different clearing houses and to be reported in two jurisdictions as well.