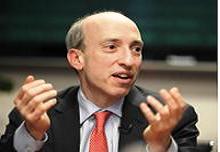 The next boss of the U.S. Commodity Futures Trading Commission needs ears as well as teeth. Gary Gensler, the current chairman, might leave this year. His self-belief is among his strengths. But as a new critique of the agency reveals, a bit more humility might have avoided some missteps.

Gensler is no slouch. He became a partner at Goldman Sachs by the time he was 30 and later worked at the Treasury and in Congress. Unlike many bankers who go to Washington, he has proved a stern critic of Wall Street and an advocate for tough regulation.

But a report released this past week by the CFTC’s inspector general documents flaws. It found that Gensler’s agency was ill-equipped to handle the MF Global disaster. The derivatives brokerage went bust in 2011 and misplaced customer funds. The review also found that Gensler used his personal email too much for CFTC business – something any banker or bureaucrat should know would raise questions. He says he didn’t know how to access his official email from home.

The CFTC’s MF Global shortcomings may indicate that Gensler was less interested in the oversight part of the job, preferring to focus on the more headline-grabbing task of making new rules. Or perhaps he didn’t notice the signals that would have revealed the agency’s watchdog function needed more attention.

Either way, the job description for Gensler’s successor is pretty intense. Swaps and futures, the CFTC’s domain, are likely areas for future financial innovation, and new products could pose systemic risks if poorly designed or supervised. So the next chief needs a deep understanding of these markets – in addition to a dose of Gensler’s aggression and an added ability to listen.

Amanda Renteria, a U.S. Senate aide, is one person being vetted for the job, according to the Wall Street Journal. She spent a few entry-level years at Goldman and several more in Congress. But it might take someone with more experience to project Gensler’s confidence while also being unassuming enough to see the CFTC’s weaknesses.

Amanda Renteria, the former chief of staff for U.S. Senator Debbie Stabenow, is being vetted to take over as head of the Commodity Futures Trading Commission, according to a report in the Wall Street Journal on May 24. Her boss was a member of the Senate Agriculture, Nutrition and Forestry Committee during the creation of the Dodd-Frank financial regulation law. In that capacity, she had some input on the legislation’s swaps provisions. Prior to her career in government, she spent three years as a financial analyst at Goldman Sachs’ Los Angeles office.
The CFTC’s inspector general released a report on May 21 faulting the agency for its handling of the MF Global failure. It said that the watchdog had not formally coordinated with CME Group, the exchange operator responsible for oversight of the brokerage. It also revealed that the regulator was unprepared to handle the incident, with no examination manuals or other means to assist staff in overseeing futures brokerages.
The report further noted that CFTC Chairman Gary Gensler was reliant on personal email outside the office. The inspector general concluded that Gensler’s recusal from the case, which he believed was proper because he had worked with MF Global Chief Executive Jon Corzine, was unnecessary.