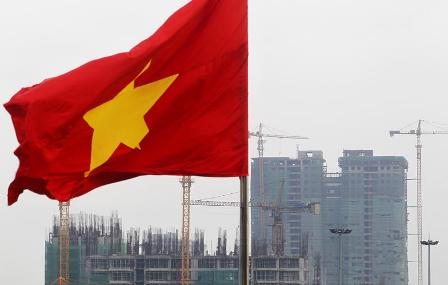 As one of the world’s few remaining communist states, Vietnam’s relationship with foreign capitalists is complex. That hasn’t stopped private equity group Warburg Pincus closing the first tranche of a $200 million investment in the country’s largest mall owner. It’s early days, but for global investors Vietnam may be back in the game.

Warburg and its associates are buying about one-fifth of Vincom Retail, their first foray in the country. The investment will help parent Vingroup pare its debt load, and follows rival KKR’s decision earlier this year to double its stake in a Vietnamese fish-sauce maker.

Besides, the safety of assets remains a worry. Foreign creditors to shipmaker Vinashin found out that a “letter of comfort” from the government didn’t live up to its billing when the state-owned shipbuilder welshed on a $600 million loan in 2010. After much bickering and a lawsuit – later dropped – from pugnacious U.S. hedge fund Elliott Advisers, the government offered lenders a settlement this year.

Poor contract enforcement and endemic corruption won’t go away soon, but Warburg and KKR may be right in betting that the economy is on the mend. Inflation – which peaked at 23 percent in August 2011 – is under control. And that’s giving the authorities wiggle room to revive growth: large companies will see their tax rates fall to 22 percent next year, from 25 percent at present. Developers like Vingroup can now improve their cash flows by paying land costs to the government in instalments.

Credit is also reviving as the government starts to tackle bad debt, at almost a fifth of total bank loans. Vingroup’s cost of local borrowing has fallen from above 20 percent early last year to around 13 percent, while the stock market is up 42 percent from January 2012. The worst may be over for Vietnam; investors should pay attention.

A Vietnamese national flag flies near a construction site opposite the National Convention Center, the venue for the 44th annual meeting of the Asian Development Bank (ADB), in Hanoi May 6, 2011

A consortium led by a Warburg Pincus affiliate has closed the first $150 million tranche of a planned $200 million investment in Vincom Retail, Vietnam’s largest owner and operator of shopping malls, according to a July 15 press statement by Vingroup Joint Stock Company, a real-estate developer and the parent of Vincom Retail.
The investment, which was first announced in May, will give the Warburg Pincus consortium an approximately 20 percent equity interest in Vincom Retail and two board seats, the statement said.
Vietnam’s retail sales grew 12 percent from a year earlier in the first six months of 2013, the slowest pace of expansion since 2003.
KKR & Co. said in January that it would more than double its initial 2011 investment in a unit of Masan Group, a Vietnamese fish-sauce maker.