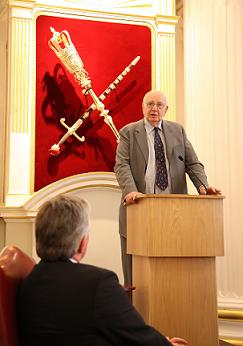 It was a tall order, but America’s banking regulators have taken a good stab at devising a framework for the Volcker Rule. A draft of the document, obtained by the American Banker, suggests the Securities and Exchange Commission, Federal Reserve, FDIC and Treasury minimized the most worrying aspect of the rule – that a prop-trading ban could undermine client-focused market-making. But it still leaves gray areas.

For starters, there is still no definition of what constitutes “short-term” or “near-term” trading. Perhaps that’s intentional. After all, a clear time limit would create an easy hurdle for any prop-trading-like investments to jump – Wall Street could simply hold onto them until the deadline passes. But not defining it creates confusion: not all prop trades are short-term. Morgan Stanley’s disastrous subprime mortgage bet in 2007, which lost almost $10 billion, was on the bank’s books for almost a year.

Other sections of the proposal may deal with this. But they are also a bit woolly in places. For example, how would the Rule distinguish in practice whether a bank’s market-making inventory is consistent with what’s needed to satisfy market-making demands, or if it’s straying into betting the firm’s capital? There’s a similar issue with how much of a new stock or bond issue the bank might “reasonably” hold in its capacity as an underwriter. But these can be hard to pin down, especially in fear-stricken markets where liquidity can dry up in a heartbeat.

Nor, 18 months after President Barack Obama first unveiled the Volcker Rule, have the regulators found an easy way of monitoring the banks’ trading activities. Those with more than $5 billion in trading assets and liabilities must provide data from 17 different metrics. The major houses probably use many of these already, which at least might keep some of the costs of implementing the rule down. But it looks like overkill: with so many individual inputs from each trading desk and no higher-level early-warning system, there’s a danger perfectly decent trades could get flagged. Even if later cleared, banks may cut some services simply to avoid the hassle. That could stem liquidity and be an information overload for already underresourced regulators.

What’s more, there’s still plenty of scope for banks to get in trouble. There’s no restriction, for instance, on trading government and mortgage-agency debt, something that helped fell Long-Term Capital Management. True, during a two-month comment period some of the murkier aspects can be clarified. But this gallant effort demonstrates that former Fed Chairman Volcker’s line – that, like obscenity, you know prop trading when you see it – was a tad too simplistic for this complex task.

Paul Volcker, former chairman of the Federal Reserve, speaking in London on May 13.

The American Banker has obtained and published a draft copy of U.S. regulators’ proposals for implementing the Volcker Rule. The four regulators - the SEC, the FDIC, the Treasury and the Federal Reserve - had intended to unveil the report on Oct. 11.