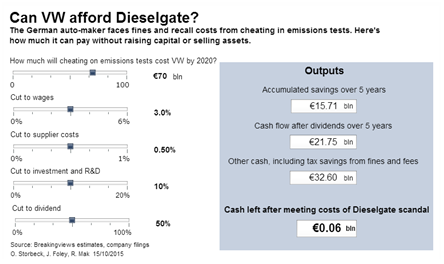 The German carmaker could save 2.3 bln euros a year by scrapping investor payouts, leaving around 50 bln euros of room to absorb fines from dieselgate. It would show shareholders aren’t getting away unscathed and that VW, whose operations look stable, has room to help itself.

Volkswagen may scrap its dividend to conserve money for the costs of its diesel-emissions scandal, German news agency DPA reported on March 29. It quoted one supervisory board member as saying nothing is decided yet “but there is no sign that people should be hoping for even a cent”.

Volkswagen last year set aside 6.7 billion euros ($7.5 billion) to cover the expected costs of recalling about 11 million diesel vehicles globally. It has postponed the release of its 2015 results until April 28 to better assess the financial implications of the crisis.