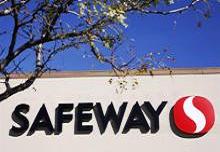 Could Cerberus pay more for Safeway? Based on the 2007 A&P-Pathmark merger, synergies could be worth more than half the $9.4 billion that the private equity firm’s Albertsons supermarket is paying for its U.S. rival. In theory that leaves room for a higher offer. But competition from the likes of Wal-Mart means cost savings may need to go to shoppers, not investors.

Both Safeway and Albertsons executives said in their conference call with investors that there would be significant cost savings, but they didn’t quantify them. A&P’s purchase of Pathmark seems a reasonable guide. Though smaller, the two companies were otherwise similar – mature grocery chains facing tough times due to rising competition. That merger generated $150 million of annual synergies, or about 1.4 percent of combined sales of $10.9 billion.

Revenue at Cerberus’s grocery arm and Safeway combined is some $54.7 billion, according to Jefferies research. At this percentage rate, annual savings would run about $750 million. Taxed at 30 percent and put on a multiple of 10, that’s a present value bigger than $5 billion.

Yet even including all the components of the deal – some of which don’t offer certain value – Safeway shareholders are only getting a 17 percent premium, or about $1.4 billion in all, over where their shares traded last month before the company said it was in sale negotiations.

On typical merger logic, that would leave room for a higher bid. Yet although Safeway has an initial three weeks to hunt for one, it’s no certainty.

Kroger, another grocer, would also be able to reap synergies and news reports suggest it showed some interest in Safeway. Yet it is busy digesting its purchase of Harris Teeter. And if any private equity shops think they can do better, even without synergies, they’d better hurry – the break fee on the deal with Cerberus rises from $150 million to $250 million for bids that come in after the 21-day “go shop” period.

And Cerberus-Albertsons or another industry buyer might not feel able to pay more, anyway. Wal-Mart, the nation’s biggest grocer, has gained market share with cheap prices. Safeway’s executives made clear that many of the savings from the merger will be plowed back into lower prices. Cerberus may end up snagging Safeway, but customers could be winners too.

The sign outside the local Safeway grocery store is framed by a tree in Arvada, Colorado October 14 2010. REUTERS/Rick Wilking

Safeway said on March 6 that it had agreed to be acquired by AB Acquisition, the owner of rival U.S. supermarket chain Albertsons which is in turn controlled by an investor group led by private equity firm Cerberus Capital Management.

Safeway shareholders will receive cash of $32.50 per share, a distribution of shares the company owns in Blackhawk Network worth $3.95 per Safeway share, and potentially the proceeds of two asset sales estimated to be worth a combined $3.65 a share, according to the company, although the sales have yet to take place.

The total of around $40 a share represents a 17 percent premium over the $34.10 closing price on Feb. 18, the day before Safeway said it was in discussions regarding a potential sale, the company said, a 56 percent premium to the company’s share price six months ago, and a 72 percent increase over the stock price a year ago.

The merger agreement includes an initial 21-day “go shop” period during which Safeway and its adviser, Goldman Sachs, will solicit alternative proposals to buy the company. News reports have suggested that another grocer, Kroger, has considered bidding for Safeway.