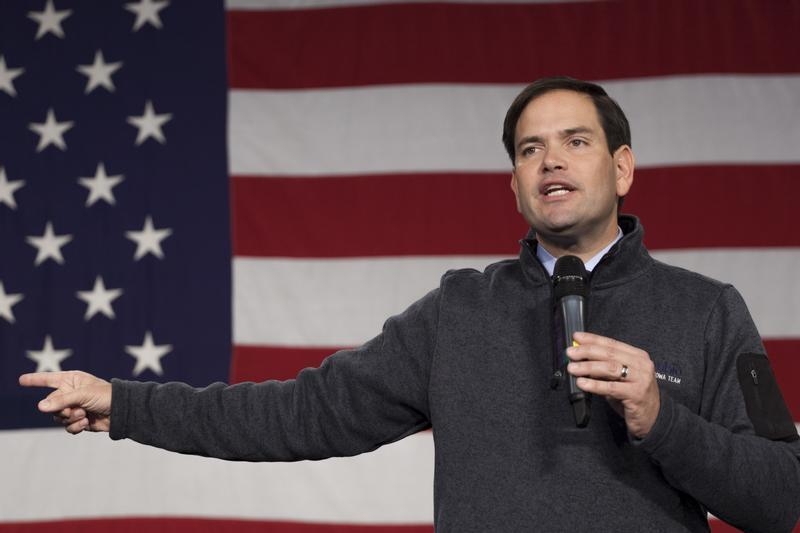 Wall Street may have the empty vessel it craves for the 2016 White House race. U.S. presidential hopeful Marco Rubio’s proposal of giving tax cuts to all is big on appeal but bereft of mathematical logic. Last week, though, hedge fund manager and Republican Party donor Paul Singer offered his backing. That should help rally support from the world of business and finance, as Singer did for Mitt Romney four years ago. And it also increases the chance that these new backers will help fill in Rubio’s hollow economic policies.

These do at least hit some of the right buttons for Wall Street. Rubio wants to cut individual and corporate taxes, reduce the number of brackets, offer family credits and eliminate levies on capital gains and dividends. That latter point is in stark contrast to an early Republican front-runner for donor cash, Jeb Bush. He wants to restrict the so-called carried-interest loophole that allows the likes of private equity firms to enjoy low tax rates on their investments even if none of their capital is at stake.

Rubio is basing his tax policy on a modified version of a 2013 proposal written by Utah Senator Mike Lee, the co-author of his 2015 plan. The first draft proposed an additional refundable child tax credit, a small cut to the top rate of income tax and no changes to corporate or capital gains taxes.

That is far less of a headline-grabber than the changes Rubio has inserted. Trouble is, as it currently stands his plan is estimated to add $4 trillion to the federal deficit. When questioned by CNBC’s John Harwood on how he would finance this, Rubio responded that his tax cuts would create a budget surplus within 10 years. In short, taxes somehow pay for themselves.

It smacks of pie-in-the-sky daydreaming. That is where Singer, who runs Elliott Management, comes in. Along with his Wall Street cohorts, he may be able to add a dose of financial coherence to Rubio’s policies. That would probably require scaling back some of his tax cuts. Considering where his support is now coming from, that may well mean favoring high finance at the expense of the populist proposals that have made Rubio’s plan so broadly appealing.

Billionaire hedge fund manager Paul Singer has sent a letter to dozens of other Republican donors declaring his support for Florida Senator Marco Rubio, according to an Oct. 30 report in the New York Times.

Billionaire hedge fund manager Paul Singer has sent a letter to dozens of other Republican donors declaring his support for Florida Senator Marco Rubio, according to an Oct. 30 report in the New York Times.