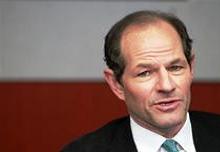 Eliot Spitzer is the model for local crusaders against financial powers that be. But the ex-NY governor’s scorched-earth style may not play in the city comptroller’s office, which he now seeks. While Spitzer may have big plans, he must re-establish trust and credibility first.

Former New York Governor and Attorney General Eliot Spitzer has announced that he intends to run in the Sept. 10 Democratic primary for New York City comptroller. To qualify, he must collect 3,750 signatures by July 11.
Spitzer was nicknamed “The Sheriff of Wall Street” for his aggressive pursuit as attorney general of alleged wrongdoing in the financial industry. He became governor in 2006 but resigned two years later after being identified as a client of a prostitution ring.
The city comptroller manages five pension funds, does budget analyses and audits city agencies.