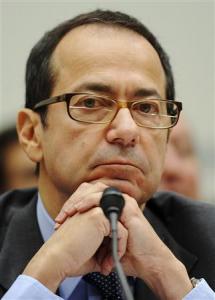 On Nov. 7, Premier Foods said its banking syndicate had agreed to defer a covenant test from Dec. 31 to March 31, 2012. Premier said it remained in “constructive” discussions with its lenders about a longer-term refinancing of the group’s debt, which matures in December 2013. Premier Foods shares closed at just under 3.7 pence on Nov. 7; they had hit a record low of 3.01p four days earlier.
On Nov. 1, Mike Clarke, the former president of Kraft Foods Europe who joined as chief executive on Sept. 1, shook up the company’s management structure, replacing the chief operating officer role with two new hires, Iwan Williams and Graham Hunter, who will serve as managing directors leading, respectively, its bakery and grocery businesses.
The company’s biggest shareholders are Warburg Pincus, with 15.8 percent; a unit of Franklin Templeton, the U.S. asset manager, that holds 11.8 percent; and Paulson & Co, with 11.2 percent, Thomson Reuters data shows.