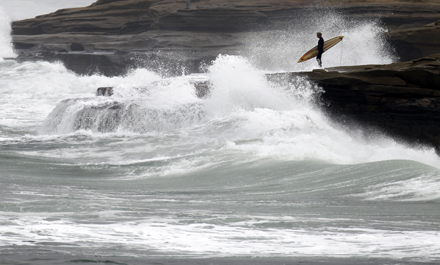 For years bid talk has surrounded the UK’s last listed water utilities. Severn Trent is now in play. A bid could top $14 bln with debt, at 35 pct above the group’s regulated value. That would be rich. Regulation may get tighter. But debt is cheap and funds are eager for yield.

A lone surfer waits to enter the water as the coastline is hit by large surf during a winter storm in Ocean Beach, California

On May 14, Severn Trent Plc, the FTSE-100 water utility, said it had received a takeover approach from two pension fund groups and a sovereign wealth fund. Under British takeover rules the consortium, made up of Borealis Infrastructure Management Inc., the Kuwait Investment Office, and Universities Superannuation Scheme Ltd, now has until June 11 to decide whether to make a formal offer. Borealis later confirmed the approach.
Severn Trent’s admission followed a report on Financial News. Citing people with knowledge of the deal, the magazine said the bid group had indicated it would be willing to pay between 2,250 and 2,300 pence a share for Severn Trent. That would value all of Severn Trent’s shares at about 5.4 to 5.5 billion pounds.
Shares in Severn Trent leapt 14.3 percent by 1020 GMT to 2,087.2 pence a share. Shares in rival United Utilities Group rose 3.9 percent to 768.5 pence.
Borealis, part of Ontario Municipal Employees Retirement System (OMERS) of Canada, owns infrastructure investments with a total enterprise value of about 50 billion Canadian dollars. KIO belongs to the Kuwait Investment Authority, the oldest sovereign fund tracked by the SWF Institute with an estimated $342 billion in assets. USS is Britain’s second-biggest pension fund, managing 36 billion pounds of assets.