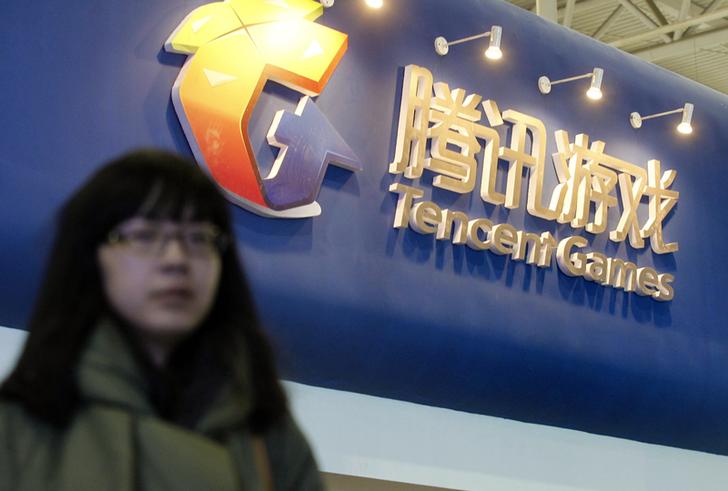 Sina’s microblog and Tencent’s mobile chat app are China’s hottest properties. The former is a bet on online ads, the latter on mobile games. WeChat has investors more fired up, but Weibo’s revenue model, political usefulness and ties to e-commerce giant Alibaba give it an edge.

A woman walks past a logo of Tencent Games in front of a booth of the company during the 10th China International Digital Content Expo in Beijing December 14, 2012

Tencent said revenue increased 37 percent to 14.4 billion yuan ($2.4 billion) in the second quarter of 2013, compared to a year earlier. Earnings of 3.7 billion yuan were 11 percent lower than the average estimates of analysts, according to Thomson Reuters Eikon. The shares rose 2.2 percent by midday on Aug. 15 in Hong Kong, to HK$361.20.
Tencent launched a new version of its WeChat mobile chat application, known in China as Weixin, on Aug. 5, including a gaming centre through which users can purchase in-game virtual items. WeChat and Weixin had 236 million monthly active users at the end of the second quarter, 2.7 times the number a year earlier.
Sina, which operates the Weibo microblog, on Aug. 14 reported year-on-year revenue growth of 20 percent to $158 million for the second quarter. The company made a net loss of $11.5 million, including a $27 million charge related to April’s tie-up with online retailer Alibaba.
Alibaba bought an 18 percent stake in Weibo for $586 million, with an option to increase its holding to 30 percent later. Advertising from Alibaba added $5 million of revenue for Sina in the second quarter, and Sina has estimated the three-year revenue benefit at $380 million.