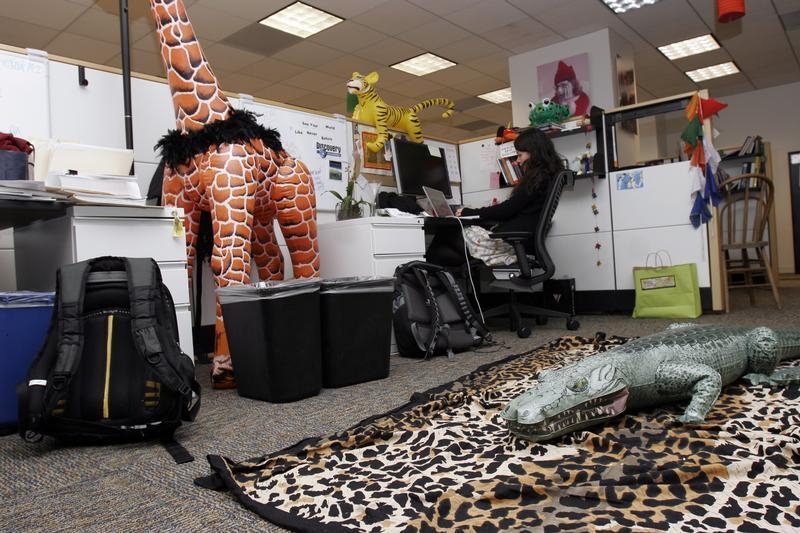 WeWork is stretching valuations for the sharing economy. The American provider of groovy office space to millennial workers is now worth $10 billion after its latest private funding round, doubling in just six months. The company is growing fast, but would have to boost earnings 15-fold to justify its worth, using more established rivals’ metrics. That’s wishful-thinking growth.

The business model is pretty internet 1.0. More self-employed people want an office besides Starbucks to work in. And more companies want the flexibility of housing smaller satellite offices in what may be temporary locations. Others just want an alternative to what WeWork executive Miguel McKelvey described at a recent conference, reported by Bloomberg Business, as offices “full of these soul-crushing acoustic ceilings, and crappy gray carpets, and draining environments with fluorescent lights.”

Throw in free beer in the commons space and the social and business networking opportunities of sharing an office, and the appeal is easy to understand for the new generation of millennials, who are set to become the largest cohort of American workers. It fits in with their belief that in a few years’ time, co-sharers will jump into driverless, Tesla-built Uber-engineered pod-cabs to get to work.

But WeWork remains, despite all the millennial fairy dust, a real-estate company that makes money on the difference between what it pays for its leases and what it charges for rent. The most obvious business-model rival is Luxembourg-based Regus, which currently trades at around 13 times estimated 2016 operating income, according to Thomson Reuters data. Applying that to WeWork’s valuation suggests it would need $764 million of operating earnings, 15 times what it made last year, according to figures in the Wall Street Journal.

That drops to just under a 10-fold increase in earnings using Boston Properties numbers. But this, the largest of the more traditional commercial real-estate firms, sports an estimated 36 percent operating margin for 2016 compared to Regus’s 8.5 percent. That reflects the economies of scale its size affords, as well as the more stable revenue it garners from larger, longer-term leases on property it owns.

WeWork – even Regus – are unlikely to match that. There’s clearly demand for the service they provide, but for all the talk of the sharing economy and free beers on tap, there’s not much going on but the rent.

WeWork, a U.S. provider of shared office space, is now valued at $10 billion after raising $400 million from Fidelity Management & Research and others, the company announced on June 24. That’s double the valuation it received after its previous funding round in December. The company leases around 3.5 million square feet of office space in the United States and in select locations around the world which it then rents out to individuals and firms alike.