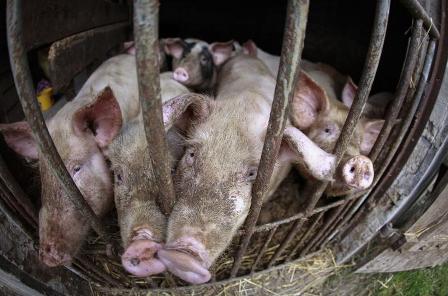 This little piggy isn’t going to the market after all. WH Group has scrapped its Hong Kong listing after investors turned their noses up at its valuation. The Chinese pork producer had already more than halved the size of the fundraising to as little as $1.3 billion. A delay which gives the company formerly known as Shuanghui more time to integrate its U.S. subsidiary Smithfield is probably the least bad outcome.

WH Group’s private equity backers were so greedy that even its 29 investment banks couldn’t sell the cut-size offer. At the bottom of the range, the IPO implied a valuation for Smithfield 21 percent above the price WH Group paid for the U.S. pork producer barely eight months ago, according to an analysis by Reuters Breakingviews.

Such blatant fattening up rankled with investors, who also objected to large share awards to two senior executives. Though WH Group scaled back the size of the offering, it didn’t cut the price – a step made more difficult by Hong Kong’s listing rules.

The current owners had promised not to sell any shares in the cut-size IPO. Pushing ahead would have left investors worrying about a stock overhang in the hands of Chinese private equity firms CDH Investments and New Horizon, which own a combined 40.5 percent of the company. The risk was that WH Group would suffer the same fate as Huishan Dairy. Shares in the Chinese farm operator are trading 38 percent below the offer price for its $1.3 billion fundraising last September.

Delaying the IPO gives WH Group time to further integrate Smithfield and prove that it is worth a full-fat valuation. The company reckons it can benefit by selling more low-cost U.S. pork to Chinese consumers. Investors will want to see more evidence that is the case. The problem with the delay, however, is that WH Group will now carry its net debt of more than $7 billion for longer. The earliest it could try to IPO again would probably be in September.

The pulled pork IPO is embarrassing for all concerned. But faced with an unappetising deal or a cancelled one, WH Group chose the least bad option.

Pigs look out from their pens on a farm subsidized by European Union in a village of Kuzawka November 24, 2012

The company had already significantly cut the size of its offering. Under revised terms, outlined on April 23, WH Group planned to raise at least $1.3 billion from the sale of new shares, down from its original target of $3 billion. However, it did not lower the target price for shares, which ranged from HK$8 to HK$11.25.

WH Group’s private equity backers would not have sold any of their existing shares in the revised IPO structure.