The ghost at the feast 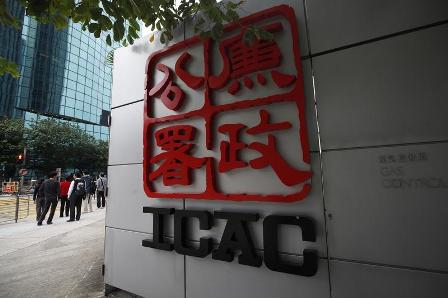 Chasing a former watchdog for lavish dinners sounds trivial, but focusing on the little things is what made Hong Kong clean up. China’s leaders also pledge to root out corruption, but lack three powerful weapons: independent institutions, freedom to complain, and zero tolerance.

The logo of the Independent Commission Against Corruption (ICAC) is seen outside its headquarters in Hong Kong March 30, 2012. H

Hong Kong’s anti-corruption agency launched an investigation into complaints about its former chief, Timothy Tong Hin-ming, after he was criticized for spending large amounts entertaining mainland officials.
Tong ran the Independent Commission Against Corruption from 2007 to 2012. During his tenure, the number of cases processed by the watchdog rose by over a third. Among the most high profile was the arrest of property moguls Raymond and Thomas Kwok in March 2012 on suspicion of graft.
Complaints about Tong centered on dinners thrown for officials in 2011. An audit report by the ICAC showed that spending per head for one event was HK$1,000, compared with a permitted HK$450. Tong also spent HK$220,000 on gifts during his five year tenure.
The ICAC was set up in 1974, after a high-profile case involving a Hong Kong police commissioner, Peter Godber, who fled the city after being charged with corruption. Godber was later captured and imprisoned.