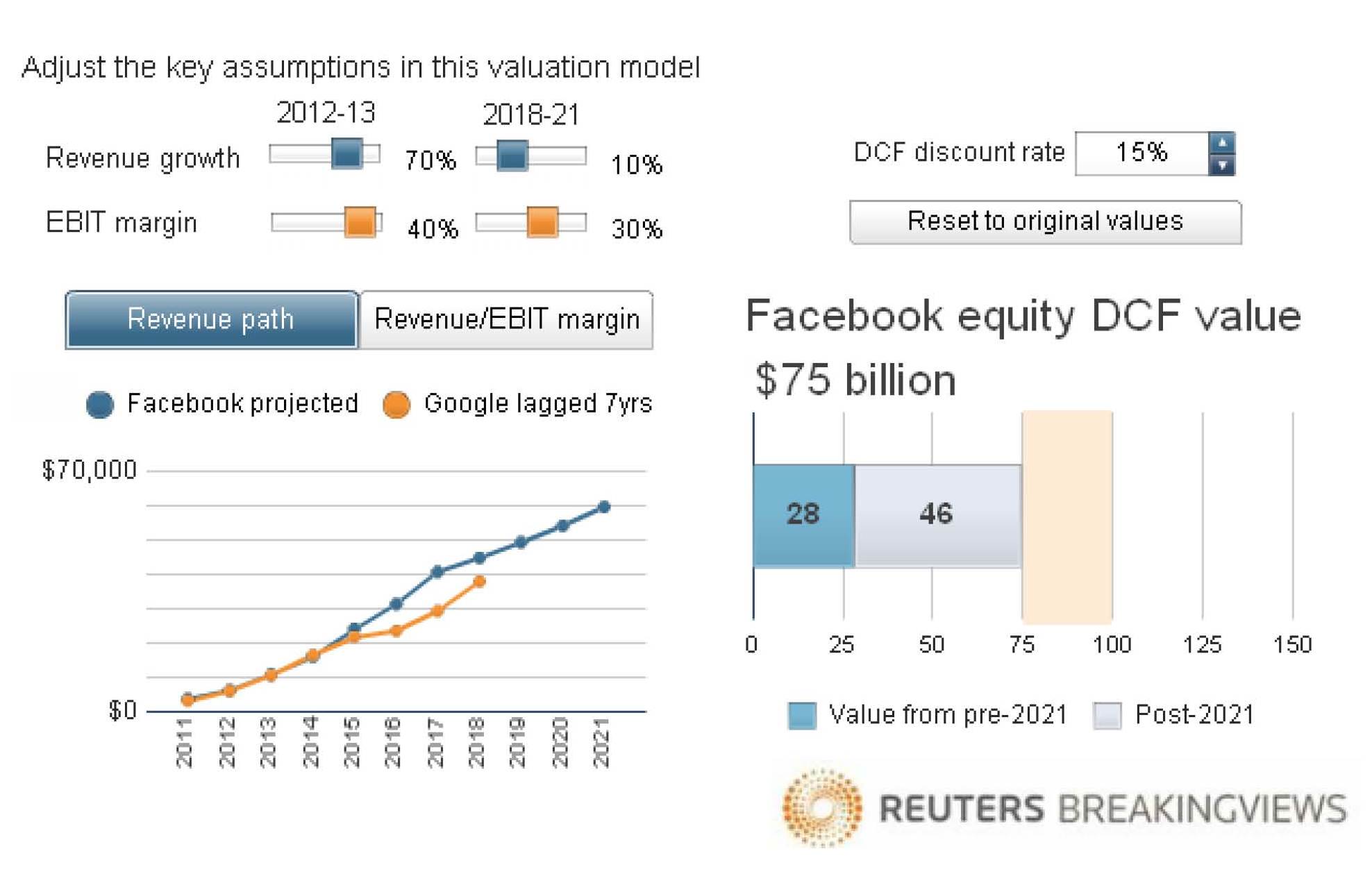 Facebook’s 31 underwriting banks are mobilizing for the company’s initial public offering. In such a hyped IPO, any kind of valuation is possible. But a comparison with the history of the social network’s closest thing to a rival, Google, suggests that even $75 billion – at the low end of the talk to date – would be a stretch. A new Breakingviews calculator shows why, and allows bulls and bears alike to tweak the inputs.

Google’s revenue of $3.2 billion in 2004 was not far off Facebook’s $3.7 billion in 2011. One way to clarify the crystal ball is to assume the social network grows on the same trajectory as the search engine did seven years earlier. Then it’s consistent to assume EBIT margins settle at something like Google’s average 33 percent level.

Add a 30 percent tax rate and modest outlays for investments, and out pops an annual free cash flow figure to plug into a discounted cash flow model based on one created by Anant Sundaram at Dartmouth’s Tuck School of Business. A 15 percent discount rate seems rational for a business in the fast-changing Internet world, resetting lower – along with revenue growth – after 2021.

Run those numbers, and Facebook founder Mark Zuckerberg is presiding over a company worth $75 billion, or about $30 per pre-IPO share. But the pricing of run-of-the-mill floats is supposed to leave something – say 15 percent – on the table for incoming shareholders. That would knock the figure down below $65 billion. And with nearly two-thirds of the value stemming from cash flows more than 10 years hence, Facebook is a risky bet.

Facebook shares may prove scarce as would-be owners, potentially including many of its 845 million users, clamor for a piece of the IPO action. A staid DCF analysis could easily be drowned out. But it does at least show how bold the assumptions must be to justify whatever price the underwriters end up persuading investors to pay to cement their friendship.

Facebook executives on March 19 briefed about 100 analysts, investment bankers and others involved in its forthcoming initial public offering at a three-and-a-half hour meeting, people present at the meeting told Reuters.

The company, which is competing with established Internet giants such as Google for online advertising, is preparing to raise at least $5 billion in a high-profile IPO that could value the company at between $75 billion and $100 billion.

Facebook, the social networking company founded by Mark Zuckerberg, filed the most recent update of its prospectus with the Securities and Exchange Commission on March 7. That document identified 31 underwriting banks. They will share a much lower than usual fee of 1.1 percent, a source told Reuters.