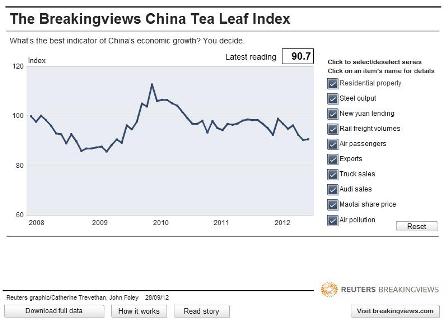 What’s really going on in China’s economy? It depends where you look. Numbers abound, but good explanations are scarce. Take the country’s Gross Domestic Product: it showed year-on-year growth of 7.6 percent in the second quarter of 2012, a whisker above the official goal. Yet vice premier Li Keqiang famously referred to GDP as “man-made” and therefore unreliable, according to a cable published by Wikileaks. Many academics and economists agree.

To get a different perspective, Breakingviews has picked ten alternative indicators. Some, like bank lending and residential property, measure finance and investment. Steel output, rail freight and truck sales offer a gauge of industrial activity. Others are more subjective, like the quality of Beijing’s air, the share-price performance of Kweichow Moutai, a brewer of high-end liquor, and sales of Audis, the car beloved of Chinese officials. An increase in the last three suggests growth, but maybe not the right kind.

We have crunched the numbers into an interactive “Tea Leaf” index, which allows readers to choose and combine their favoured measures.

The result suggests things currently aren’t as bad as in the depths of the crisis. But they’re not far off. At the end of August, the overall index stood at 90.7, compared with a low of 85.7 reached in April 2009.

Property investment and bank lending offer a bleak view. Though they are still above their crisis lows, the trend since the beginning of 2010 has been mostly down. Trade and transport indicators improve the picture, but only a bit. At the top end, things are holding up better. Sales of Audis have stabilised while Kweichow Moutai shares have performed well this year.

What probably matters most in China is jobs, yet the official data is patchy. Steel production, an industry that employs over 3 million China, might offer some clues, but the picture is equivocal. While production is holding up, earnings have collapsed. Baosteel’s recent decision to suspend production at a plant in Shanghai shows that can’t last forever.

In short, China’s slowdown looks manageable for now. But expect the country’s new leaders to be doing some anxious number-crunching of their own.