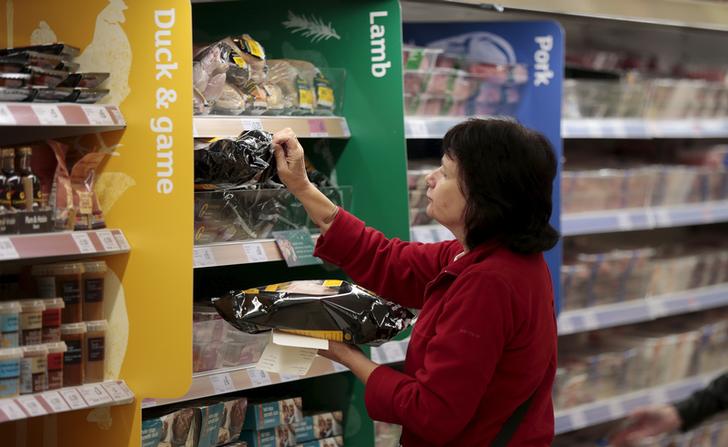 J Sainsbury gains market share. Wm Morrison’s sales growth turns positive. After a couple of years of misery for British retailers, developments like this sound like green shoots. But where shareholders are concerned, it’s all relative. The food retail market is pretty much flat, and most of the signs that matter are going in the wrong direction.

The likes of Tesco, Sainsbury, Wal-Mart’s Asda and Morrison, who make up around three-quarters of the UK grocery sector’s sales, are scrabbling for revenue at the expense of profit, and reversing a trend that played out for most of the last decade. Prices are being cut, and will be cut more. The price gap between big grocers and German discounters Lidl and Aldi is 15 percent to 20 percent on comparable items. Sainsbury thinks it ought to be as low as 5 percent.

Sales are important, but they’re really just a signpost on the way to the number that really matters: returns on capital. The bits in between are troubling. Wage bills are increasing by around 4 percent a year. Online sales are growing rapidly, but come with unattractive profit economics – higher costs and consumers placing more, smaller orders. Sainsbury has kept its EBITDA margin stable for years, but with prices still too high, that may not last.

The capital itself is the other problem. Retailers have too much. They rolled out space when sales were growing. Now it’s hard to jettison it – partly because stores could get snapped up by the aggressive low-cost incomers, whose returns on capital are still healthy enough to justify expanding. Sainsbury’s return on capital is likely to be just 6 percent for the year ending in March, Credit Suisse reckons. Tesco and Morrison are looking at below that.

One solution is to use space differently – which explains why Sainsbury is considering an offer for Home Retail Group, the owner of generalist retailer Argos. There are financial ways to reduce capital too. Sainsbury is taking longer to pay its suppliers, for example. But really all the big retailers can do is buckle down and wait for the gains from years of high margins and prices to go gradually back to whence they came: customers’ wallets.

A customer chooses lamb at a Sainsbury's store in northwest London, Britain October 23, 2015.

The company said it believed second-half like-for-like sales would be better than the first half.

Sainsbury said on Jan. 5 that it had made an approach in November to Home Retail, the UK group that owns general store Argos and homewares chain Homebase. It said on Jan. 13 that there was no certainty that it would make a formal offer.

Rival grocer Wm Morrison said that like-for-like store sales excluding fuel increased by 0.2 percent in the nine weeks to Jan. 3, against the comparable period a year earlier, beating a previous-quarter decline of 2.6 percent, excluding fuel. The shares rose as much as 14 percent on Jan. 12, to a high of 174 pence, before closing up 8.9 percent.

Total like-for-like food sales by UK retailers fell by 1.1 percent in December, year-on-year, based on three-month moving-average data reported by the British Retail Consortium. They have been contracting every month since August 2013.