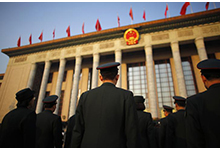 Why do investors seem so sanguine about China’s anti-corruption campaign? Government investigations of top executives would hammer shares in Western blue-chips. Not so for those caught in President Xi Jinping’s crackdown. That’s because the campaign is so sweeping, and targets people rather than companies. Besides, the whole market is already being punished.

The latest to be swept up in the crackdown are Zhu Fushou, general manager at Dongfeng Motor Corp, and – Bloomberg says – Agricultural Bank of China President Zhang Yun. Both sit atop major concerns: Dongfeng is the country’s second-biggest automaker and a partner to Honda, Peugeot, Renault and Nissan; the $158 billion AgBank is the mainland’s third-largest lender. Yet neither shares in Dongfeng’s $12 billion Hong Kong-listed subsidiary, nor in AgBank, have reacted much.

That makes more sense than you might imagine. For a start, while investigations may be terrible news for the bosses involved, things generally change less for state-owned enterprises. They will still do Beijing’s bidding and pump oil or connect phone calls no matter who occupies the corner office. And because the attacks tend to centre on individual misbehaviour, there is little risk of a crisis of corporate confidence. One arm of the state is not going to put another out of business. Public-sector banks will keep lending.

Moreover, bad behaviour is a fact of life: earlier this year Bernstein strategist Michael Parker found reported graft had besmirched two-thirds of China’s fifty largest companies since 2000. Takedowns by Xi’s top graft-buster, Wang Qishan, are equally widespread. His Central Commission for Discipline Inspection has this year turned its sights on the SOEs in telecoms, oil and shipping. Just a few days ago, it said it would probe financial institutions and regulators.

So there are no Enron-style surprises for investors. And indeed, a lot seems priced in across the market. The biggest Chinese companies listed in Hong Kong trade on just 7.4 times earnings. That is low even allowing for China’s economic wobbles and other growing pains: Japanese stocks are nearly twice as expensive and U.S. shares almost three times pricier. Yet as long as investigators regularly take Chinese bosses away, a discount seems warranted.

Military delegates arrive for the opening of the annual full session of the National People's Congress, the country's parliament, at Tiananmen Square in Beijing.

China is investigating the number two executive at China’s Dongfeng Motor Corp for suspected corruption, the country’s graft watchdog said on Nov. 2, making him the most senior executive to be drawn into a widening probe involving the country’s second-biggest carmaker.

Zhu Fushou, who is also executive director and president at Hong Kong-listed subsidiary Dongfeng Motor Group Co Ltd, is being investigated for “suspected severe violation of discipline”, the Central Commission for Discipline Inspection (CCDI) said in a statement on its website. “Discipline violations” generally refer to corruption.

Zhu could not immediately be reached by Reuters for comment. An official from Dongfeng Motor Corp’s publicity department confirmed the investigation is taking place, but declined to give further details. The Hong Kong unit said Zhu’s roles and duties had been “temporarily suspended”.

Meanwhile Zhang Yun, president of China’s third-biggest lender by assets, Agricultural Bank of China Ltd (AgBank), was taken away to assist with an investigation, Bloomberg reported on Nov. 2, citing people familiar with the matter. Reuters was unable to verify the reports. Telephone calls to AgBank were left unanswered.