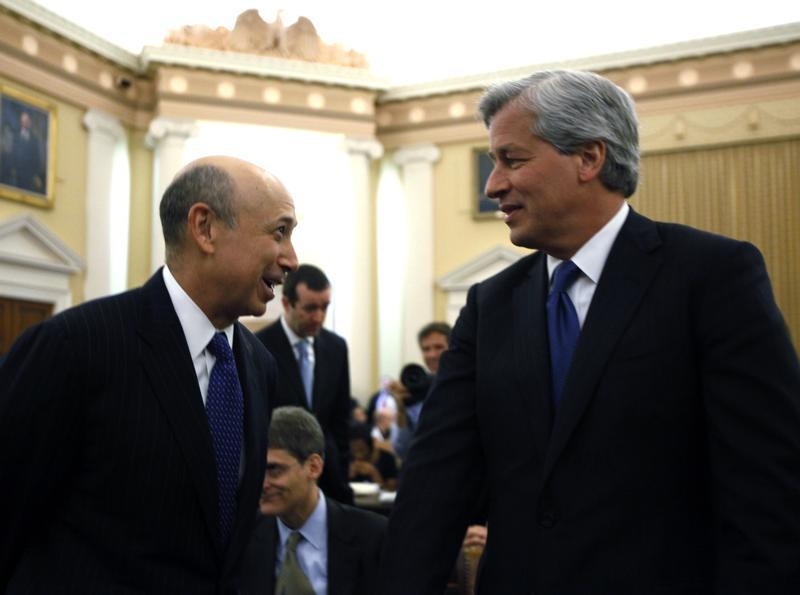 Staying power in the corner suite isn’t always what it’s cracked up to be. With Brady Dougan stepping down as chief executive of Credit Suisse, it leaves JPMorgan, Goldman Sachs and Wells Fargo as the three American mega-banks with pre-2008 bosses. Jamie Dimon, Lloyd Blankfein and John Stumpf have overcome all manner of challenges but also are approaching a decade at the helm. One lesson from the crisis was the danger of sticking around too long.

The trio of remaining chieftains has outlasted peers for good reason. Since being appointed, their shares have performed better than the broader financial stock indices. Stumpf, who was named CEO in June 2007, has even overseen a better run than the S&P 500 Index, a claim neither Dimon nor Blankfein, who were tapped to run their companies in December 2005 and June 2006, respectively, can make.

As counterparts at Citigroup, Bank of America and Barclays and beyond were steadily nudged out, Blankfein overcame one of the first of many bruising legal settlements to beset the industry, as well as an early beating in Congress. Dimon fought through the London whale fiasco and a personal health setback. Stumpf, who had the benefit of his predecessor Richard Kovacevich’s experience as chairman for the start of his term, navigated the U.S. mortgage debacle and economic downturn well.

Their survival skills are a virtue only up to a point, however. Many of the worst-hit financial institutions were led by longstanding CEOs, suggesting a link between extended tenure, groupthink and complacency. Jimmy Cayne led Bear Stearns for 15 years. Dick Fuld was running Lehman Brothers for 14. Marcel Ospel consolidated power in the chairman’s office at UBS for about seven years after running the Swiss group and its predecessor firms for six. At some point, shareholders of JPMorgan, Goldman Sachs and Wells Fargo may want to think about cutting a long story short.

Credit Suisse on March 10 appointed Tidjane Thiam, chief executive of the UK’s Prudential, as its new CEO, replacing Brady Dougan, who will step down at the end of June after eight years in the role.

Credit Suisse on March 10 appointed Tidjane Thiam, chief executive of the UK’s Prudential, as its new CEO, replacing Brady Dougan, who will step down at the end of June after eight years in the role.