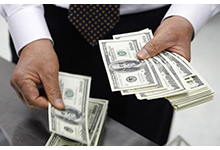 So much for deleveraging. Despite near-universal promises to reduce borrowing, global debt has escalated since the financial crisis. Governments, households, companies and banks owe $53 trillion more than they did at the end of 2007, according to a new report by the McKinsey Global Institute. The swelling demands more radical surgery.

It’s no secret that wider government deficits and low interest rates have led to extra borrowing in a sluggish global economy. Even so, the rate of expansion is startling. Total debt was 286 percent of global output by mid-2014, up 17 percentage points from the end of 2007. Over that period, government liabilities increased at a compound annual rate of 9.3 percent, far exceeding economic growth. Corporate debt rose by 5.9 percent a year. In China, total borrowing quadrupled to $28.2 trillion.

The debt bulge increases the risk of future crises. Though banks have more equity and have stopped expanding their balance sheets, bond markets and other forms of non-bank lending have more than filled the gap. Moreover, there is little prospect of countries growing their way back to prudence. Only five relatively small economies saw total debt fall as a proportion of GDP over the past seven years. Slow growth and falling inflation means the burden will keep expanding.

The diagnosis calls for more drastic measures than have been considered so far. One idea is to make debt contracts more flexible, so that lenders share in the pain if the value of the underlying collateral falls. Another is to end the favourable tax treatment of interest. But these measures will not lower accumulated debt. Tackling the backlog requires default, or some form of forgiveness. This can be messy, as the Greek government’s battle with the euro zone authorities illustrates.

But any analysis of debt must also factor in the identity of the lenders – after all, the sum of global assets and liabilities remains zero. Much of the increase in sovereign debt since 2007 is in the hands of central banks from the same country. Cancelling those loans by permanently turning them into money may be the only way to reverse the swelling.

An employee of the Korea Exchange Bank (KEB) counts U.S. 100-dollar bills at the bank's headquarters in Seoul.

Global debt increased by $57 trillion to $199 trillion between the end of 2007 and the middle of 2014, according to a study by the McKinsey Global Institute published on Feb. 5.

Total debt of households, companies, governments and the financial sector has reached 286 percent of global GDP, up from 269 percent at the end of 2007.

The biggest increase was in government debt, which expanded to $58 trillion from $33 trillion, an annual growth rate of 9.3 percent. Corporate debt has expanded by 5.9 percent a year to $56 trillion.

McKinsey said the world’s failure to reduce leverage after the financial crisis raised questions about the adequacy of tools to manage debt and avoid future crises. “We find it unlikely that economies with total non-financial debt that is equivalent to three to four times GDP will grow their way out of excessive debt.”

China’s total debt grew by $20.8 trillion, the study found, reaching 282 percent of GDP and accounting for more than one-third of the global increase since 2007.