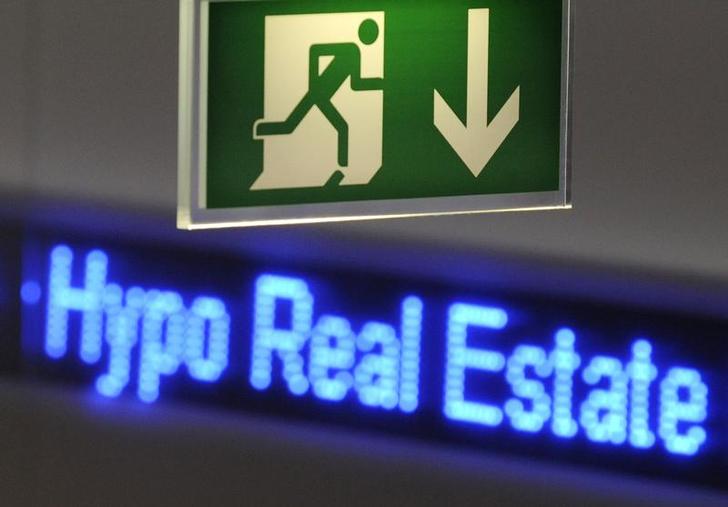 In the midst of the Greek crisis, Germany’s government is pursuing a 1.5 bln euro IPO of Deutsche Pfandbriefbank, a remnant of Hypo Real Estate, which collapsed in 2009. While still hobbled by the past, the lender is recovering. A knockdown price takes legacy issues into account.

An electronic information board with Hypo Real Estate written upon it is pictured under an emergency exit sign at the Frankfurt stock exchange.

German property and public investment lender Deutsche Pfandbriefbank (PBB) on July 7 set the price range for its initial public offering at between 10.75 euros and 12.75 euros, aiming to raise between 1.16 billion euros ($1.27 billion) and 1.37 billion euros in gross proceeds. The bank said the first day of trading was planned for July 16, with book-building planned to end a day earlier.

PBB is owned by nationalised lender Hypo Real Estate (HRE) and is targeting a minimum placement of 75.1 percent of its shares, with the federal government continuing to hold a stake of at least 20 percent for two years after the IPO.

HRE was required to sell PBB by the end of 2015 as a condition of European Commission approval of its state bailout and nationalisation of the lender in the financial crisis.

HRE received a 10 billion euro capital injection as well as 145 billion euros in liquidity guarantees, and has since worked to cut costs and shift unwanted assets into a bad bank.

Of the total bailout money, 1.3 billion euros remains in PBB. One billion euros was paid back on July 6 and Germany’s financial market stabilisation agency FMSA - the government’s ownership vehicle for the lender - is targeting to avoid losses when selling shares in the IPO.