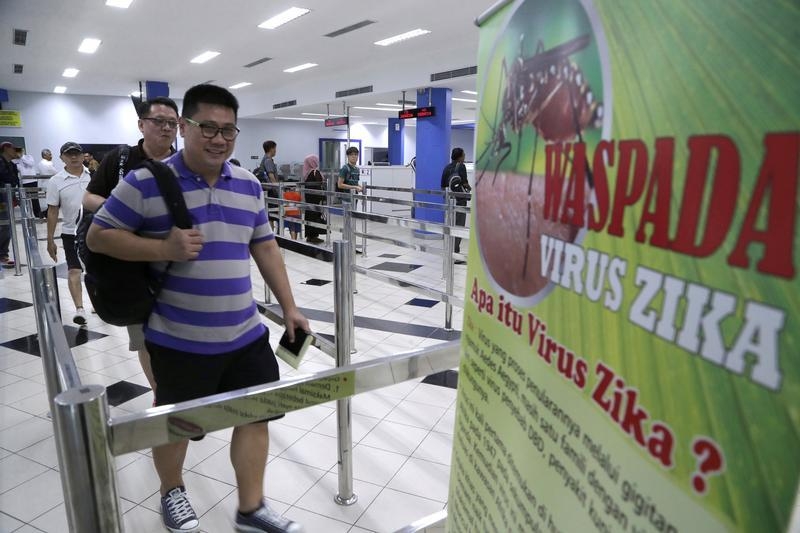 The virus is taking hold in Singapore and countries around the finance hub. The SARS crisis showed how changes in human behaviour can hurt growth more than an epidemic. Zika’s grim effect on babies also adds a fear factor. Asia can ill-afford to see visitors stay away.

Passengers from a ferry from Singapore walk past a poster warning of the Zika virus at the International Port of Batam Centre, Batam, Riau Islands, Indonesia September 1, 2016 in this photo taken by Antara Foto. Antara Foto/M N Kanwa/via REUTERS ATTENTION EDITORS - THIS IMAGE WAS PROVIDED BY A THIRD PARTY. FOR EDITORIAL USE ONLY. MANDATORY CREDIT. INDONESIA OUT. - RTX2NRET

A Zika outbreak in Singapore could have a small impact on the almost $300 billion economy, the country's central bank chief said on Sept. 6.

"It's too early to tell. I would say early indications are there could be some small impact, but it's not likely to be significant from an overall economy outcome," said Ravi Menon, managing director of the Monetary Authority of Singapore.

Prime Minister Lee Hsien Loong was quoted on the Channel News Asia website calling for countries in Southeast Asia to "join hands" to fight Zika, saying "We should prepare ourselves for a possibly extended campaign against Zika but ensure that the region remains open and connected for business and trade."

Singapore has confirmed 329 Zika cases, Reuters reported on Sept. 11. Thailand has counted around 100 cases, and Malaysia recorded its first case of the virus in a pregnant woman on Sept. 7, according to Reuters.

The World Health Organization says that 70 countries have found evidence of Zika since the beginning of 2015. The agency is advising pregnant woman to avoid areas affected by outbreaks, but has issued no general restrictions on travel or trade as of its latest update, released on Sept. 6.

The WHO declared clusters of neurological conditions associated with the Zika virus an international public health emergency on Feb. 1.  Zika infection is linked to complications including neonatal malformations, notably microcephaly, a condition in which a baby has an unusually small head.