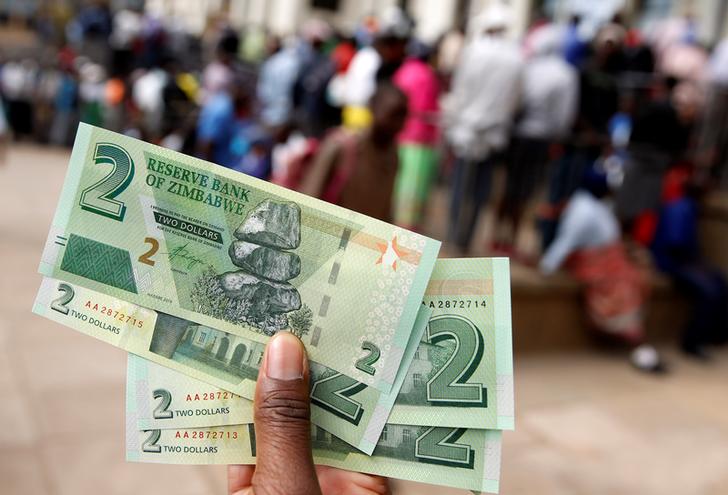 The government is blaming South African insurer Old Mutual and phone-based payment systems for a currency collapse. Its fondness of money printing is the more likely culprit. Attacking the stock market and mobile money will damage savings and confidence, and spur capital flight.

A man poses with Zimbabwe's new two dollar banknotes as customers queue outside a bank in Harare, Zimbabwe, November 12, 2019.

Johannesburg-listed insurer Old Mutual is seeking clarification from Zimbabwe’s ruling party after a spokesman said it had decided to “eject Old Mutual from the financial system” because of its alleged role in stoking inflation, Bloomberg reported on July 12. Old Mutual denied any impropriety.

The move follows the government’s decision to suspend trading on the Harare stock exchange on June 26 and ban mobile phone-based payments, as part of efforts to address a slide in the value of the Zimbabwe dollar.

Prior to the suspension, Zimbabwe’s industrial stock index had posted year-to-date gains of 666% as Zimbabweans rushed to convert any available cash into equities as protection against hyperinflation.

The Zimbabwe dollar fell to 57 against the U.S. dollar on June 23 in the southern African nation’s first foreign currency auction since scrapping a fixed exchange rate of 25 to the greenback. On the black market, it is trading at around 105 to the U.S. dollar.