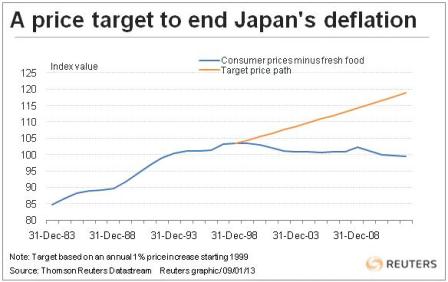 Japan has a real chance of ending deflation. But the authorities need to act boldly. It will be hard for the Bank of Japan to dispel a decade of accumulated pessimism by merely adopting a formal inflation target. The goal of the central bank and the finance ministry should be to make people believe that price gains that didn’t occur in the past 10 years will now take place. A de facto currency peg may be the way to engineer those expectations.

At its two-day monetary policy meeting starting Jan. 21, the central bank is expected to debate the merits of entering into an accord with the government. Such a deal, which Japan’s new Prime Minister Shinzo Abe is pushing for, will specify a formal inflation target of 2 percent and may even include a commitment to job growth.

While an improvement on the status quo, this new arrangement still may not be enough. Since February last year, the BOJ has said it will seek 1 percent inflation “for the time being.” The central bank’s excuse for not adopting a formal target is that it would not be able to hit it because short-term interest rates – the most potent weapon in any modern central bank’s arsenal – are near zero. And while the BOJ has engaged in quantitative easing since 2001, money-printing is not a reliable strategy for meeting an inflation objective because the private sector views the excess liquidity supplied by the central bank as temporary. As a result, any inflation target runs the risk of being missed year after year. Since inflation can only be targeted annually, cumulative misses will not necessarily put pressure on the BOJ to strive harder. Pretty soon, the target won’t be credible.

A better strategy would be to announce that the BOJ’s goal over an unspecified “medium term” is for an index of consumer prices to rise by 1 percent year. To make amends for the deflation that Japan has already suffered, the clock could start in 1999, when prices began to plateau (See graphic). Just to eliminate the accumulated deflation, the BOJ would be required to deliver a 16 percent increase in prices.

The advantage of this approach, first proposed by former Princeton economist Lars Svensson, is that if the BOJ undershoots the goal, it will have to work even harder to get the economy on the desired price path. The BOJ will only be off the hook when it gets prices back on track. A price target has the added benefit of being easy for the public to understand.

Setting a target is one thing. Having the tools to achieve it is another. Until now, the BOJ’s favoured approach has been to print money to buy domestic assets. This has shown little sign of working so far: quantitative easing has increased base money in the economy to 27 percent of GDP without stimulating inflation.

But the BOJ could also engineer inflation expectations by using the currency. One strategy, advocated by Stanford University economist Ronald McKinnon, calls for Japan and the United States to agree to keep their bilateral exchange rate stable for a very long time. That would help to eradicate the deflationary expectations that have become entrenched in the Japanese consumer psyche.

If the yen extends the slide that started before the tough-talking Abe took office, the currency could well hit 100 to the dollar by the time a new BOJ governor is appointed in April. That could become a de facto peg. If the yen strengthens from that level, the finance ministry, which in Japan has the authority to intervene in currency markets, should be prepared to sell unlimited quantities of yen, newly printed by the BOJ. Better still, the BOJ law could be changed to enable the central bank to directly intervene in the currency market.

Explicitly targeting the exchange rate raises the spectre of currency wars. But Washington is unlikely to be overly upset. First, 100 yen to the dollar isn’t a shockingly low level. Second, if Japan is able to tame deflation, it will eventually import more goods and services.

With the right target and the right tool, Japan can escape its deflationary trap. Right now, it has neither.

The Bank of Japan will consider easing monetary policy at its next meeting on Jan. 21-22 as it eyes doubling its inflation target, Reuters reported on Jan. 9.
Any easing will likely take the form of another increase in the BOJ’s 101 trillion yen ($1.2 trillion) asset buying and lending programme.
Under intense pressure from new Prime Minister Shinzo Abe, the BOJ will likely adopt a 2 percent inflation target, double its current price goal, and issue a statement with the government pledging to pursue bold monetary easing steps.

The Bank of Japan will consider easing monetary policy at its next meeting on Jan. 21-22 as it eyes doubling its inflation target, Reuters reported on Jan. 9.
Any easing will likely take the form of another increase in the BOJ’s 101 trillion yen ($1.2 trillion) asset buying and lending programme.
Under intense pressure from new Prime Minister Shinzo Abe, the BOJ will likely adopt a 2 percent inflation target, double its current price goal, and issue a statement with the government pledging to pursue bold monetary easing steps.