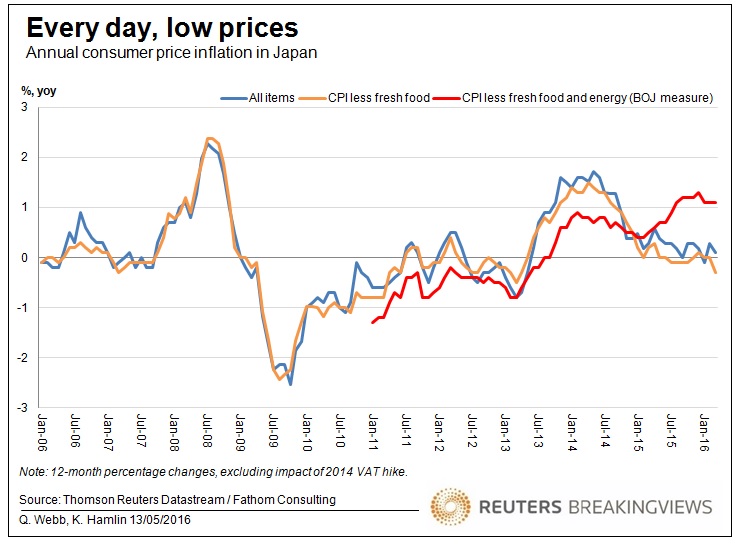 Abenomics has over-promised and under-delivered. Japanese Prime Minister Shinzo Abe’s bid to revive anaemic growth, reverse falling prices and rein in government debt has relied too heavily on the central bank and been sideswiped by a global slowdown. Keeping the project alive now requires fresh boldness.

When he took office in December 2012, Abe set out to lift real economic growth to 2 percent a year, with consumer prices rising at the same rate. His main weapons were the famous “three arrows” of aggressive monetary policy, a flexible fiscal stance, and widespread structural reform.

Abe has achieved some success. Unemployment is just 3.2 percent, a low last seen in 1997. In his first three calendar years in office, the economy expanded about 5 percent in nominal terms. A weaker yen has helped deliver record corporate earnings; as of May 13 the Topix stock index had returned 70 percent including dividends. Prices have inched upwards.

But the core targets remain out of reach. The International Monetary Fund expects Japan’s GDP to grow just 0.5 percent this year. Even after cutting out volatile prices for fresh food and energy, the Bank of Japan’s preferred measure of inflation is running at just 1.1 percent. And the central bank keeps delaying its deadline for hitting the 2 percent target, which it now expects to reach in the year ending March 2018. Analysts still think that optimistic. Meanwhile, the yen has rallied unhelpfully and the BOJ faces accusations it is ineffective, after unexpectedly making no change to policy at its last meeting.

One snag is psychological: the deflationary mindset is hard to shake. Firms can borrow very cheaply yet hoard lots of cash and resist big pay rises. Workers are not pushy about wage hikes, and reluctant to spend.

There were errors, too. Abe faced concerns that Japan’s government debt, at 2.4 times GDP, could become unsustainable. So he kept fiscal policy relatively orthodox, promising that taxes would cover public spending, excluding interest payments, by 2020. He hiked the country’s sales tax in 2014, denting growth and confidence. And he relied heavily on BOJ Governor Haruhiko Kuroda, whose institution now buys an extraordinary 80 trillion yen a year ($740 billion) of bonds. Meanwhile, structural reforms remain far from complete – in everything from encouraging more women into the workforce to reconsidering a deep aversion to immigration.

So is it time for Abe to ditch his main goals? Yes and no. The inflation target is ambitious after decades of falling prices, especially as many developed nations are now grappling with similar issues. But it remains worth shooting for, not least because aiming lower would invite currency appreciation. The real GDP growth target is less useful, and could be replaced by a goal for nominal output.

An overhaul of some sort looks imminent. As host of this month’s G7 summit on May 26-27, Abe has a platform to declare that governments, not central bankers, must rescue the world economy via fiscal stimulus – although prospects of a significant global accord appear to be receding.

On the home front Abe will probably unveil an extra budget of more than 5 trillion yen, or 1 percent-plus of GDP. He could also ditch a second increase in the sales tax planned for next year or, even better, temporarily lower the current 8 percent rate – although top lieutenants deny a postponement has already been decided. Waiting until November would let Abe see more economic data, before scrapping the hike and calling a December election, suggests WisdomTree Japan CEO Jesper Koll. Reform could speed up too: Morgan Stanley economists suggest everything from cutting corporate taxes, to allowing foreign graduates to stay on in Japan, to means-testing benefits.

But any revival will still depend heavily on the BOJ. Most simply, the central bank could demonstrate a renewed commitment to inflation using its already familiar tools of “quantitative and qualitative easing”. It could expand a tentative (and controversial) move into negative interest rates. In February the BOJ started charging 0.1 percent on nearly a tenth of the 253 trillion yen that commercial lenders have deposited with it. It could charge more on a wider range of deposits. It might also simultaneously encourage banks to extend credit by giving them subsidised loans.

Or the BOJ could acquire more shares. It already buys exchange-traded funds worth 3.3 trillion yen a year but could expand this several times over. Peterson Institute economists suggest increasing these purchases 20-fold. That would surely spark a big market rally.

For a truly radical move, the central bank could unleash its unlimited ability to print money. Governor Kuroda says “helicopter money”, which is usually taken to mean handing central bank cash directly to citizens, is illegal – and those around him think he means it, Reuters says. But Deutsche Bank analysts have argued this and other kinds of “monetary financing” are actually doable in Japan, albeit sometimes subject to parliamentary or prime ministerial approval.

The true bombshell, as championed by former UK regulator Adair Turner, would be for the central bank to effectively write off the government debt it owns by converting it into interest-free bonds. That would spur growth by loosening the shackles on the state, which would no longer have to worry about fiscal rectitude. And it would embolden households to spend more, knowing tax hikes were not looming ahead. Abenomics may not be there quite yet. But that would be a truly bold reboot.

Japan’s economy is expected to have grown just 0.2 percent on an annualised basis in the first quarter, a Reuters poll showed on May 9. The official data is due May 18. The Bank of Japan recently cut its forecast for growth in real gross domestic product in the year to March 2017, by 0.3 percentage points to 1.2 percent.

Economy Minister Nobuteru Isihara and Chief Cabinet Secretary Yoshihide Suga both denied reports that Prime Minister Shinzo Abe had decided to delay a planned increase in the sales tax due in April 2017. On May 17 Abe told parliament he would decide “appropriately at the appropriate time”, and reiterated that the increase would be made as planned, barring a major financial crisis or natural disaster.

Japanese policymakers are taming market expectations ahead of a gathering of Group of Seven finance leaders on May 20-21, saying Tokyo never intended the G7 to agree on joint fiscal action it sees as only possible in times of crises such as the collapse of Lehman Brothers in 2008.

The G7 will likely settle with a vague agreement on the need to deploy a “balanced” dose of monetary, fiscal and structural policies, Reuters reported on May 17, citing officials involved in the negotiations.

Bank of Japan Governor Haruhiko Kuroda probably means what he says in dismissing “helicopter money” as a real option, Reuters reported on May 16, citing officials and close associates of the BOJ leader.