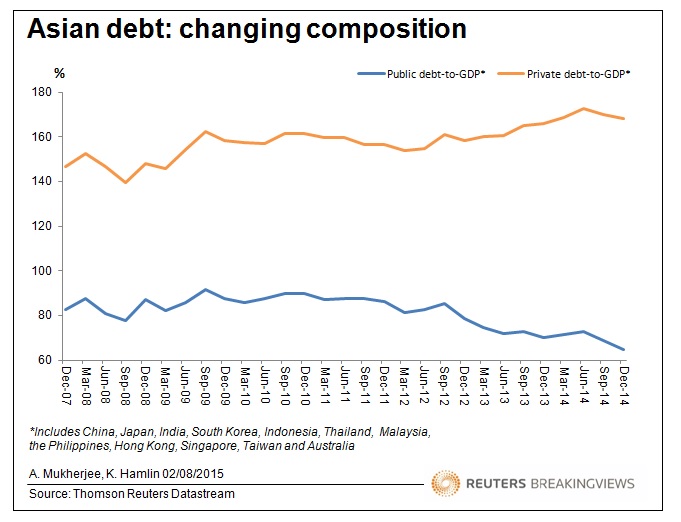 Asia’s debt hangover is about to turn into a splitting migraine. Blame it on an austerity pill turning into poison.

Companies and households in the 12 largest economies of Asia-Pacific roughly owe about 168 percent of their nations’ GDP to creditors, up from 147 percent in 2007. Put another way, the private sector’s debt burden has risen by 2.5 months of annual output since the financial crisis.

This ratio is set to inch up further as GDP is increasing at a slower pace than debt. In turn, higher debt tends to weigh on GDP growth, because leveraged consumers hold back on spending and leveraged producers hold back on investments. Restraint makes sense for each company and every household, but is a disaster for the overall economy. The “paradox of thrift” simply reduces incomes for everyone, making loans even harder to service. China is struggling with just such a toxic interaction.

Governments can help, typically by running budget deficits. The extra funds provided by fiscal aggression can slow or reverse the painful cycle of rising debts and slowing growth. But Asian authorities have been loath to lift the fiscal squeeze. The more they read about the troubles that deficit spending brought to Greece, the queasier they got. Asia-Pacific’s public debt-to-GDP ratio has crashed from 90 percent in 2012 to 65 percent.

In contrast, there has been a 12 percentage point increase in the ratio of Britain’s public liabilities to GDP since March 2011. For all his austerity talk, Prime Minister David Cameron piled up debt; his Asian friends deleveraged.

But further deleveraging by governments might trap Asian economies in a debtors’ prison by dragging down GDP growth and lowering inflation. Souring loans might force banks to ration fresh credit. Growth could nosedive. To break this vicious cycle, Morgan Stanley economists are recommending fiscal stimulus in the form of tax breaks and rebates for consumers. It’s unlikely that governments will heed the good advice.

Fiscal expansion in China is being held back by messy local government finances. Indonesia and Thailand are finding it hard to bump up public spending. South Korea’s ageing society makes the authorities frugal, even as Korean private consumption is being dragged down by an overhang of household debt. India’s fiscal ammunition is spent; it’s hoping that a new goods and services tax will allow it to reload.

The Singapore government is an outlier. As the International Monetary Fund enthusiastically notes, its budget surplus, as large as 8 percent of GDP in 2012, will shrink to less than 2 percent this year.

More Asian borrowers need a helping hand from their governments. After all, they had gorged on loans because China was expanding rapidly, and demanding more raw materials. Besides, central banks in developed economies were printing cheap money by the truckload. The expectation was that China’s credit-fuelled growth would continue to produce robust income growth for everyone, while the West’s money-printing would keep real interest rates low globally. Mortgage borrowers thought that low real rates would make property a great investment. And everybody gambled on a permanently weak dollar.

All those bets have gone wrong: China’s GDP growth has slowed. That is hard on highly leveraged Chinese companies, hurts trade incomes everywhere from Australia to Indonesia and creates a deflationary shock for a global economy whose other growth cylinders – the United States, Europe, Japan and India – have failed to compensate for an abrupt slowdown in the People’s Republic.

The deflationary chill is turning Asia’s debt hangover into a graver malady. Asian companies are responding to slow revenue growth with restrained pay. Private cash flows, both corporate and household, are squeezed, just as inflation-adjusted borrowing costs are increasing. Monetary authorities in the region are no doubt trying to help by cutting policy rates. However, inflation rates have fallen faster, so real rates are rising.

One effect of that is to turn property from a hot asset class to a troubled one. Meanwhile, the expectation of U.S. rate increases is keeping the dollar strong. That increases the real weight of the $963 billion that the Chinese owe to banks overseas.

It’s time for governments to stop relying solely on monetary magic, and loosen the fiscal purse strings. Further austerity can be a serious health hazard.

Companies and households in Asia-Pacific owed almost $36 trillion to domestic and foreign lenders at the end of December last year, according to a Breakingviews analysis based on data from the Bank for International Settlements. Total credit to the private non-financial sector amounted to 168 percent of GDP, a 21 percentage point increase since December 2007. In the same period, the ratio of public debt-to-GDP in the 12 largest economies of the region fell to 65 percent, from 83 percent.

Companies and households in Asia-Pacific owed almost $36 trillion to domestic and foreign lenders at the end of December last year, according to a Breakingviews analysis based on data from the Bank for International Settlements. Total credit to the private non-financial sector amounted to 168 percent of GDP, a 21 percentage point increase since December 2007. In the same period, the ratio of public debt-to-GDP in the 12 largest economies of the region fell to 65 percent, from 83 percent.