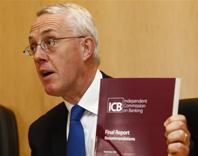 Policymakers around the world want to prevent taxpayers from rescuing delinquent banks. That, for example, is the overarching goal of the UK’s Vickers report. If implemented, those proposals should eventually produce a safer and fairer financial system. But in a stagnant economy where credit is scarce, bailout-free banking remains a distant and possibly unattainable goal.

There’s no doubting the urgency of Vickers’ mission. The financial crisis prompted supposedly private financial institutions to throw themselves on the mercy of the state. Some governments were overwhelmed. Even banks that received no direct support benefited, because the system did not collapse. In other words, the bailouts exposed massive moral hazard in the financial system. If left unchecked, this will eventually produce another severe crisis.

Breaking the unhealthy link between banks and taxpayers is therefore crucial. Vickers’ solution is to stuff lenders with more equity and loss-absorbing debt, and to put their consumer and small-business operations in ring-fenced subsidiaries. The latter will make it easier to wind down failing banks. The former will ensure that any losses are borne by shareholders and unsecured creditors, not the public. Put together, the reforms should encourage investors to pay closer attention to banks risks’, rather than just the rewards.

If such a banking system were designed from scratch, it would be more stable and more equitable than the one we have today. But making the transition to this more desirable state of affairs is tricky. For one, bank bondholders who face a real risk of future losses will demand greater compensation. This will make bank credit more expensive.

According to Fitch, the five-year historical default rate for the world’s banks is 0.8 percent. But if lenders that were rescued by governments are included, the default rate rises to 8 percent. Ending the “too big to fail” problem will involve incurring real up-front costs in exchange for the immeasurable and possibly distant benefit of avoiding future bailouts.

Higher funding costs will make some banking activities uneconomic. This is not a bad thing. Businesses that are only profitable thanks to an implicit subsidy from taxpayers should probably not exist. Besides, most of them are sub-sectors of investment banking. One of ring-fencing’s big advantages is that it exposes these businesses to the true cost of private wholesale funding, clearly separated from government-guaranteed retail deposits.

However, it would be naïve to believe that the Vickers reforms will end financial excess. Even when faced with better incentives, banks and their creditors will at times be guilty of exaggerated optimism. And their mistakes will not just be confined to investment banking. HBOS and Northern Rock, which were floored by reckless property lending, would both have been entirely inside the ring-fence. Given Britain’s dismal track record, another speculative property boom and bust will be hard to avoid.

What will future authorities do in this situation? Will they use their powers to wind down failing lenders, protecting depositors while leaving all unsecured creditors to their fate? Or will they conclude that enforcing moral hazard is not worth the risk of triggering another credit crunch?

This is not a straightforward calculation. The economic costs of Britain’s financial crisis were large: GDP shrank by almost 5 percent between mid-2008 and mid-2009. If the government had not injected capital into Royal Bank of Scotland and Lloyds, the contraction would have been more severe. Despite the public anger, future politicians may conclude that bailing out the banks was a relative bargain. But the success of Vickers’ proposed reforms depends on the authorities convincing investors that next time really will be different.

Future booms seem a distant concern when Britain is still suffering through the hangover from the last party. The sluggish economy has exposed a worrying asymmetry in debates about reforming the financial system: while policymakers have plenty of ideas about how to stop banks from getting carried away in future, they have few suggestions about how to stimulate private sector lending today.

Once again, the government may have to step in. George Osborne, Britain’s chancellor of the exchequer, has already announced an as-yet-undefined “credit easing” plan to help small businesses. Others have recommended setting up a state-owned bank that can offer cheap loans, or converting one of the partly-nationalised banks into a full-fledged government lender.

Countries such as Germany and France have experimented with state-directed lending in the past, with mixed success. The same goes for China, which uses the country’s big state-controlled banks as tools of economic policy.

Britain will not go that far. However, if Vickers’ proposals are implemented in the way that the commission intends, it’s likely that bank credit will be more expensive and harder to get than before. To the extent that this affects consumers and businesses, the government will be under pressure to intervene.

In its eagerness to protect taxpayers, the Vickers commission may have had the perverse effect of encouraging the state to play a more explicit role in the banking system. If the government’s role is made clear, this is not necessarily a bad outcome. But it can hardly be what the commission members were hoping to achieve.

John Vickers, head of the UK Independent Commission on Banking, holds a copy of his report during a news conference in London (Reuters/Andrew Winning)