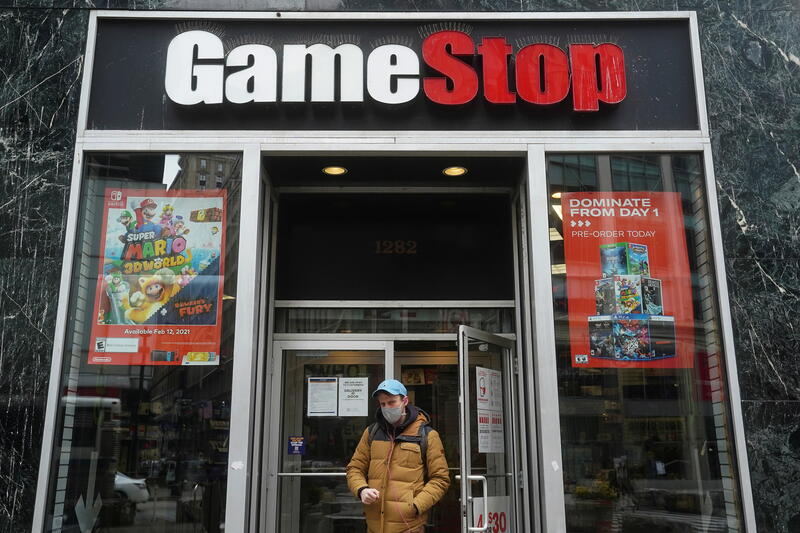 The wild surges in so-called meme stocks like GameStop have created the financial-markets equivalent of a whodunnit. As with detective mysteries, there’s a weapon, an opportunity for enrichment and a motive. What’s harder to find is a victim. And because the irrational moves in a widening array of stocks poses a direct challenge to high finance, the punishment will likely outweigh the crime.

Video-game retailer GameStop was unloved, and little traded, by big-time investors. Then its shares started to rocket. And kept rocketing. On the surface, this is because users of online forums like Reddit had noticed that the stock was heavily bet against by large investors and figured that what had gone down could be made to go up. This “go long-the-shorts” strategy spilled over into other heavily bet-against stocks, like American Airlines, BlackBerry and even video-store dinosaur Blockbuster.

Underneath GameStop’s chaotic rise is a company, and some people – including Chief Executive George Sherman, and recent investor Ryan Cohen, the entrepreneur behind Chewy, the online pet retailer. But GameStop itself, which was worth just $1.4 billion a month ago, is no longer the point. The company has disappeared into a swelling cast of bystanders and commentators, from Tesla boss Elon Musk to Senator Elizabeth Warren. The Securities and Exchange Commission is “monitoring” the situation.

There are two. First, the options market. Buying call options in a company lets investors take bigger risks than they can by simply acquiring shares, especially if they also borrow to acquire the securities. Options can easily be worthless when they expire. Conversely, there’s theoretically no limit to how much the option’s value can rise, and an option-holder only needs to put down a fraction of the stock’s value to get that exposure.

Behind the curtain, a market-maker like Citadel Securities that facilitates this activity is trading in actual shares so as to be protected whatever happens. And because of the wizardry of options arithmetic, the closer it gets to the price at which the option can be exercised, the more the market-maker needs to buy. That pushes up the price still further. The result can be what participants call a gamma squeeze. People in the real world call it “holy cow: GameStop shares are up 1,000% in a week.”

The other weapon, though, is money. Without that, there’s no trading. And if there’s one thing America has an abundance of right now, it’s cash. For many people, Covid-19 has created additional disposable income, and a combination of fiscal stimulus and loose monetary policy has pumped up the supply of funds. Deposits in commercial banks rose by $3 trillion in 2020, according to the Federal Reserve. That’s more than was added in the preceding five years.

Taking a punt on GameStop, or any stock and its options, has never been simpler, thanks to the growth of apps like Robinhood Markets that have brought zero-cost trading to the locked-down masses. Covid-19 and its associated restrictions, including on sports, have given millions of people plenty of spare time in which to scroll through online forums, get angry at the Wall Street elites and place bets.

Behind that trend, though, are some bigger ones. Americans have ever more reasons to buy stocks. One is that interest rates, which determine rates paid on bank deposits, are at rock-bottom levels. Meanwhile, retirees are increasingly left to fend for themselves, in a world where healthcare costs are rising, and defined-benefit pension schemes are a distant memory for most. More than half of American households own stocks in some form, according to Pew Research.

Part of the opportunity was already being removed on Thursday, after Robinhood and Interactive Brokers brought in restrictions on trading certain stocks. GameStop fell by more than 75% at one point. But the move towards more retail investors engaging with equities and other securities, and being able to do so easily and cheaply, is not going away.

This is where things get tricky – or at least, less scientific. Investors clearly believe they can make money when stocks rise, and they are correct. Look no further than Tesla, whose shares have risen eightfold in a year, despite CEO Musk warning at one point that its share price could go down “like a souffle under a sledgehammer.”

But the calculus on acceptable losses has also changed. Traders buying into GameStop can see the company’s struggling finances, and they know the risk of buying options, but they forge ahead anyway. Some may lose their shirts – others their homes. Some will just end up a bit poorer, with a story to tell.

This shouldn’t be a surprise. Nobel Prize-winning economists Esther Duflo and Abhijit Banerjee showed that in the world of economics, development experts are often surprised to see that extremely poor households who come into extra cash are often more likely to spend it on tobacco, alcohol or parties than they are extra calories. Humans need entertainment. Playing the stock-market casino fits the bill.

A whodunnit needs a body, but so far, there isn’t one to be seen. While investors will lose money, it’s hard to see how this threatens the safety and soundness of the financial system. Some hedge funds that had shorted stocks faced big losses, but that’s hardly a systemic issue. Citadel and fellow hedge fund Point72 both bailed out Melvin Capital, one of the original firms betting against GameStop.

A bigger worry would be if, because of these swings, the markets seized up, and viable companies could no longer raise capital, or if retail investors more broadly lost their faith in the stock market as a means of creating wealth. Ditto, if investors struggling to cover losses in some companies dump their stakes in others, creating a market-wide slump. Again, there’s little sign of that happening.

Conceptually, though, there are some victims, and the kind who are well placed to seek revenge. The whole, huge financial system is built around Wall Street banks that prize themselves on their ability to price risk accurately and make money out of market dislocations. The volatility created by manic trading is good for them, but the specter of prices that make no sense can persist for quite a while, and may not be.

Robinhood’s evasive action shows it has read the room: any reprisals for the market antics of this week are likely to focus on the company that led in providing the opportunity.

Most likely, that will revolve around the idea of “gamification,” a word that Massachusetts regulators used in their critique of the trading app in December. The regulator’s contention was that by making trading seem like a game and using engagement techniques that casinos deploy to keep users hooked, Robinhood was acting irresponsibly. The SEC may now take up the question. Trading apps might have to come with bigger, uglier health warnings, like cigarettes.

Is that overkill? Probably. There’s little chance that Reddit vigilantes will upset the functioning of stock markets over the long term. But that’s not really the point. Just as GameStop doesn’t have to be worth $25 billion for the shares to hit that value, Reddit vigilantes don’t need to storm Wall Street’s battlements to be perceived as a threat that needs to be de-fanged.

A GameStop is pictured amid the coronavirus disease (COVID-19) pandemic in the Manhattan borough of New York City, New York, U.S., January 27, 2021.