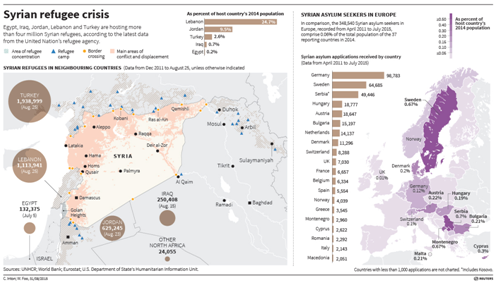 An influx of hundreds of thousands of people from war-torn Syria into the European Union is causing huge political rifts. The result could be backlashes against immigrants and the European Union. Here’s a breakdown of what’s at stake.

The numbers are only part of the story

The inflow of migrants is not that large in absolute terms. Nearly 340,000 were detected at the European Union’s borders in the first seven months of the year, according to regional border agency Frontex. It would take a 15-fold increase for the numbers to amount to even 1 percent of the EU’s population.

But migration is very unevenly distributed. Greece, the entry point for most illegal migrants from Syria and Afghanistan, has 11 million citizens and its own economic woes. And Germany could this year receive 800,000 asylum seekers, the equivalent of nearly 1 percent of its population.

Strains will intensify as migrant numbers rise. The latest Frontex figures are nearly three times higher than for the same period last year. And the potential numbers are much higher. There are more than 4 million refugees in countries neighbouring Syria, some of whom are moving on as their conditions worsen.

Old political anxieties are being rekindled…

Immigration and its economic impact has challenged the EU for the past decade. After the bloc expanded eastwards in 2004, workers from central and eastern European countries were able to move around freely. Some in western Europe viewed this as a new threat to job security and wage growth. Sensitivity to new migrants is all the higher in the aftermath of the financial and euro zone debt crises, which depressed economic activity, boosted unemployment and required budget cuts.

…and new ones have surfaced

Countries bearing the bulk of the burden are pitted against those opposed to quotas. This is fraying EU unity and prompting soul-searching about values and founding principles. For example, the Schengen open borders policy applied across most of the EU has been called into question. The debate about pluralism in the EU has also become more fraught because of the radicalisation of some second and third-generation immigrants.

The bloc’s ageing population could certainly use younger blood. Those aged 65 or more will account for 28 percent of the population by 2060, compared with 18 percent in 2013, according to the European Commission. And those aged 80 and over will be almost as numerous as those aged 14 or less.

Also, the OECD has found the fiscal impact of immigration tends to be small in most countries, especially if host states do a good job of integrating incomers into their labour market.

However, this sort of cost-benefit analysis may work out differently if migrants are very young or uneducated. Turning those kinds of migrants into productive members of the workforce tends to come with upfront costs for host countries. Many European states are not in an ideal position to meet those costs right now.

…but the political risks are clear

Anti-immigration parties, such as France’s National Front or Britain’s UK Independence Party, could benefit. There might also be a backlash against the European Union’s vision of open borders and shared responsibilities.

The risks are particularly high in Britain, which is going to hold a referendum on whether to stay in the EU. Immigration is at the top of the list of UK voters’ concerns as the government moves further away from its goal of cutting net inflows to less than 100,000 a year. A rise in anti-immigration sentiment risks translating into more public support for exiting the EU.

But taking a hard line on accepting more asylum seekers carries its own risks since Prime Minister David Cameron is relying on key powers such as Germany, France or Italy to accommodate his efforts to renegotiate Britain’s relationship with the EU before the vote.

Migration could make other issues harder to resolve

Fraught discussions about how to deal with migrants have no obvious or immediate bearing on other issues such as Greece and the euro. These are what investors have recently been most focused on. But there is no room for complacency. Ill-tempered arguments over immigration risk spilling into other domains. This will make it harder to forge the stronger economic and financial ties needed to prevent future crises.

The European Commission is preparing for a new clash over refugees with national governments, especially in eastern Europe. It will propose national quotas to relocate 160,000 asylum seekers arriving in Greece, Hungary and Italy, with Germany taking in more than 40,000 and France nearly 31,000. Countries that do not want to take part would be able to make financial contributions to buy their way out of the obligation on a temporary basis.

The European Commission is preparing for a new clash over refugees with national governments, especially in eastern Europe. It will propose national quotas to relocate 160,000 asylum seekers arriving in Greece, Hungary and Italy, with Germany taking in more than 40,000 and France nearly 31,000. Countries that do not want to take part would be able to make financial contributions to buy their way out of the obligation on a temporary basis.